DS are you ready for this? Thousands of Americans moving North

It may seem like a quiet country where not much happens besides ice hockey, curling and beer drinking. But our neighbor to the north is proving to be quite the draw for thousands of disgruntled Americans.

The number of U.S. citizens who moved to Canada last year hit a 30-year high, with a 20 percent increase over the previous year and almost double the number who moved in 2000.

Of course, those numbers are still outweighed by the number of Canadians going the other way. Yet, that imbalance is shrinking. Last year, 23,913 Canadians moved to the United States, a significant decrease from 29,930 in 2005.

"There has been a definite increase in the past five years -- the number hasn't exceeded 10,000 since 1977," says Jack Jedwab, the association's executive director. "During the mid-70s, Canada admitted between 22,000 and 26,000 Americans a year, most of whom were draft dodgers from the Vietnam War."

The current increase appears to be fueled largely by social and political reasons, says Jedwab, based on anecdotal evidence.

"Those who are coming have the highest level of education -- these aren't people who can't get a job in the states," he says. "They're coming because many of them don't like the politics, the Iraq War and the security situation in the U.S. By comparison, Canada is a tension-free place. People feel safer."

One recent immigrant is Tom Kertes, a 34-year-old labor organizer who moved from Seattle to Toronto in April.

Kertes attributes his motivation to President Bush's opposition to gay marriage, and the tactics employed during the war on terror since 9/11.

"I wanted a country that respected my human rights and the rights of others," he says. "We joked about it after Bush won re-election, but it took us a while to go through the application."

Kertes, who moved with his partner, is happy in his new home. "Canada is a really nice country. My mother is thinking about it. My stepfather has diabetes and has health issues. So, he'd be taken care of for free if he moved up here."

Not that Kertes doesn't get homesick every once in a while. "I have no intention of giving up my citizenship. I have an American flag at home on the wall. I didn't have that in Seattle. All of a sudden, I'm a nationalist. On the Fourth of July, I really missed being home."

Jo Davenport, who wrote "The Canadian Way," moved from Atlanta to Nova Scotia in December 2001. She also cites political reasons for her move, saying that she disagreed with the Bush administration's decisions after 9/11.

"Things are totally different here because they care about their people here," she says, explaining that she's only been back home once or twice.

I can see it now. Political upheavel in the Canadian gov't about illegal "Americans" crossing the border and destroying the Canadian way of life. Canadian Radio Talkshows force vote to stem floods of illegals from America. Crime in Canada on the increase from roving gangs of illegal "Americans". And then we have the Canadians fighting back by forming groups known as "Icemen" to post along the border and of course the hue and cry to build a fence to keep the Americans out!

Sorry Channahon, the comparison was just to much to resist. Seriously, interesting article. Thanks for posting.

Do you think the Canadian cry for a wall would go nuclear if we started the rumor that Barbara Striesand and Alec Baldwin were send driving moving trucks headed due North! DS, get your gun because the last thing you need is America's trash.

All you Americans, be sure and hide your guns carefully when you cross that border.

Let's set up a commune in Raglafart....

I can see how anyone would be driven to give up all the politics that go with being an American.Democrats,Republicans,Liberals,
Its all crap , I haven't trusted any president since JFK.
Up here we have the same crap on a smaller basis.We get reamed with taxes,and if you want to own a handgun,it stays at the club.I can only guess that all the new Canadians are making the move after retirement,because if you are a current ups driver you will be making about $5 less an hour.We are a nice country.
not as nice as say Switerland,but we are quite nice.Theres enough free speech to allow morons to carry on just like there,
only life is much nicer knowing that 99.9% of the people do not have a concealed weapon.
A

Hey DS, is it BYOB or are you buying. LOL

Staff member
"only life is much nicer knowing that 99.9% of the people do not have a concealed weapon."

What are the three countries that report the highest rates of violent crime? Australia, England/Wales, and Canada - in that order. Canada in particular loves to blame the US for its violent crime problem, but if we were "exporting crime" to Canada, don't you think we would have a higher crime rate? We don't - Canada is #3, while the US doesn't rank in the top 10.

The police cannot be everywhere. One of the most effective means of reducing violent crime is empower the law-abiding to defend themselves from attack. [KABA]

Strange that the top three countries that report the highest rates of violent crime ALL have draconian anti-gun laws! 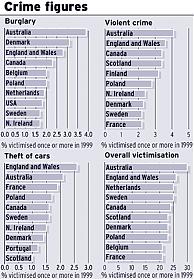 How do you spell our nieghbors to the north??

For those who want to move there....

I'm sure Canada is a nice place to live(outside of winter).Just do us a favor,when you retire and visit Fla. in the winter,please stop wearing those speedos swim trunks.And that goes for you Europeans to.
A

over9five said:
"only life is much nicer knowing that 99.9% of the people do not have a concealed weapon."

What are the three countries that report the highest rates of violent crime? Australia, England/Wales, and Canada - in that order. Canada in particular loves to blame the US for its violent crime problem, but if we were "exporting crime" to Canada, don't you think we would have a higher crime rate? We don't - Canada is #3, while the US doesn't rank in the top 10.

The police cannot be everywhere. One of the most effective means of reducing violent crime is empower the law-abiding to defend themselves from attack. [KABA]

Strange that the top three countries that report the highest rates of violent crime ALL have draconian anti-gun laws!
Click to expand...


Hmmmm, 9/5's post has me thinking. The post seems to be longer than his normal 2 lines. Possible identity theft? Scratching(no pun, scratch) my head. The avatar changing also brings up another question. Who,s got that darn eyeball? Reminds me of that other situation(thread starting with the letters Jo....). Maybe I need to run to the sups office for the answers. 9/5 is that really you, or is it an imposter. Im going to keep my eye on you..........

over9,you do make some good points,but some of those facts are misleading.I took the time to research and tried to find a US city that was similar to Toronto in population.Chicago is just slightly higher.
Toronto has around 2,500,000 people,Chicago,2,850,000.
In 2006 there were 78 gun related deaths compared to Chicago`s
225.Maybe the difference is the retaliation factor,I`m not sure,and from what I read Chicago has a clemency policy that includes $100 for every gun turned in to the police.
You were right that only a small percentage of guns are smuggled in.
Most crimes are committed with guns stolen from collectors.
Your argument that if everyone had a gun to protect themself may work great in suburbia,but in big cities,it seems like whoever is the faster draw wins.
My dislike for guns started at an early age when my cousin took me out to shoot ground hogs.I did manage to shoot one,and I cried myself to sleep that night ,its comparable to hitting a dog with your car only doing it on purpose.
OK I`ll shut up now.

Staff member
"The post seems to be longer than his normal 2 lines."


Line 1: Actually, only the last line was mine; the others were taken from a crime monitoring site.

Actually, the website was comparing all violent crimes, NOT just gun crimes.
(Maybe they use chainsaws up in Canada, and guns in the States?)

Uhoh, that was three sentences!

Canada is the world's second largest country with
3.5 people living in each square kilometer and
a population of just over 30 million.

Toronto is Canada's largest city with a population of 2.5 million

Income taxes and consumption taxes are higher but the health care is free.

Show me a serious slum in Canada.

There are no abortion laws; it’s legal without restriction.

They have tougher gun control laws and a murder rate much lower than the U.S.

They also have maternity leave at nearly a year off with most of the salary kept during that time.

But the further north you go, the colder it gets!!

Now on the other hand, U.S. is the third largest country with 74 people living in every square mile and a total population of 300 million.

UPS vs. FedEx. Who gets to be king of hill?