February 29, 2008 The Foreign Policy Follies
A cavalcade of error, right, left and center by Justin RaimondoI must be getting old. This virus, or whatever the heck it is, really knocked me for a loop. It's funny, but I recall thinking, just before I came down with this, that I'd managed to entirely avoid getting sick this winter, and – whammo! Hubris – it's the bane of mankind.
At any rate, that's my feeble excuse for not writing the usual 3000-word analysis of one particular aspect of the federal government's overseas shenanigans. Instead, we're going on a whirlwind tour of the current foreign policy follies, at home as well as abroad.
Turkey's invasion is escalating pretty quickly, with Ankara declaring their "temporary" incursion could last as long as a year, and Baghdad demanding "Troops Out!" The US is the monkey in the middle, with defense secretary Robert Gates averring that the Turks had better get out in "days," or, at most, "a week or two." The Turks, for their part, maintain their "right" to cross the border with Iraq (really Kurdistan) in hot pursuit of Kurdish Workers Party (PKK) "terrorists," who attack civilian targets in Turkey proper.
This is a clarification of the preemptive war doctrine, adopted by the Bush administration as the core canon of our post-9/11 foreign policy theology, which makes it clear that this "principle" is not universally applicable: it applies only to the United States, and selected allies – of which Turkey certainly is not one. And in spite of his much-vaunted "universalism," I'm sure John McCain is willing to make an exception in this case.
Speaking of McCainiacs, the McCainiac-in-chief has staked out a unique position on the Iraq war question, one that addresses the history of the dubious intelligence and false premises that led us into that costly conflict in terms of a simple, easy-to-understand slogan: That was then, this is now.
Addressing Barack Obama directly as the putative Democratic nominee, McCain again averred that Obama would hand over Iraq to Al Qaeda, and countered the contention that bin Laden's minions would never have gained entry if not for the US invasion;
"On the issue of my differences with Senator Obama on Iraq, I want to make it very clear: This is not about decisions that were made in the past. This is about decisions that a president will have to make about the future in Iraq. And a decision to unilaterally withdraw from Iraq will lead to chaos."
Ignore the past, and plunge into the future. Irrespective of one's position on the war – or the presidential race – one has to ask: is this really how a self-proclaimed "conservative" formulates policy?
Conservatism, as I've been led to understand it, is all about empiricism: a methodology that upholds the superiority of the tried-and-true, and validates a reverence for tradition. However, when the traditionalists – or their leaders – declare, in effect, that history is bunk, we have truly entered Bizarro World.
Conservatives are really lost in the wilderness these days, and the death of William friend. Buckley, Jr., has proved to be the occasion for a lot of commentary on conservatism, past and future. I did a short piece for Taki's Top Drawer, which you can read here: I would add that some of the commentary which has come out, hailing Buckley for his purging of the "isolatonist" Right from the ranks of the conservative movement, is coming from ostensibly antiwar liberals, like Chris Matthews the other day on MSNBC, who made just this point. Yet if we had more "isolationists" (i.e. pro-peace Ron Paul types) in the GOP, we would never have been in the mess we are today. And then, I guess, Democrats like Señor Matthews wouldn't have the war as a campaign issue. Once a partisan, always a partisan. Now if we're going to have partisanship over at MSNBC, why not give Pat Buchanan his own show – he'd be more than a match for Matthews and Keith Olbermann.
The good guys on the right, over at The American Conservative, have a new regular blog written by the estimable Daniel Larison, and I urge you to go over there and check it out if you want to know what's right with the conservative movement of today. Continuing our discussion of the other day: Yes, I understand his point that the Obama phenomenon is not going to cure all our foreign policy ills, and I don't fault him at all for trying to tamp down my apparent Obama-mania. I don't think I've made it clear enough that I'm more interested in Obama's supporters than I am in Obama: that is, the phenomenon is more significant than the man. At any rate, now that I haven't cleared that up, I should note that, as if on cue, the tail-end of the Democratic debate seems to confirm Larison's point.

President Obama hired a Secretary of State who had no relevant experience for the job because he wanted to avoid criticism from her – or even a 2012 challenge – and because he read in a book that Lincoln surrounded himself with rivals.

Then he hired someone who was qualified but who thinks global warming is a bigger threat than terrorists with airplanes or Mullahs with nuclear weapons.

And the results speak for themselves. Let’s take a short trip around the world to see if we can find any foreign policy successes.

Mexico: The country continues to deteriorate into a narcostate, and what’s more Mexicans are none too happy with us for fueling the problem with intentionally sent weapons.

South America: Leftism has been in the march throughout the continent during Obama’s presidency. No reversals to speak of. Venezuela remains in ruins, but people there may finally be taking matters into their own hands. 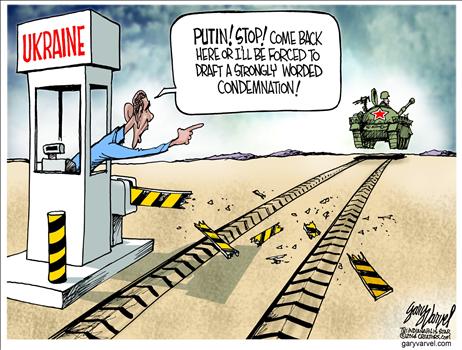 Is there a point you are trying to make? Because it's lost.

An actual solution or idea, instead of a cartoon would be helpful.
R


I can change bands at any time, but thought some of you may like something completely different.

Is there a point you are trying to make? Because it's lost.

An actual solution or idea, instead of a cartoon would be helpful.
Click to expand...

moreluck said:
Who died and made you a mod. ???
My point was made by the political cartoon.....are you too dense to get it ??
Click to expand...

You had a point? What was it? Do you want President Obama to go to war over Crimea? What would you have him do?

For a zombie thread, your own posts keep bumping it back to the top giving it life. If it truly was the zombie thread you say, you'd shut up, let it fall down the list and back into the darkness from which it came.

Moreluck, your posts only go to re-enforce RR's claim against you.

I don't live my life according to what pinheads say.
I don't wanna,
I don't hafta,
I'm retired !! 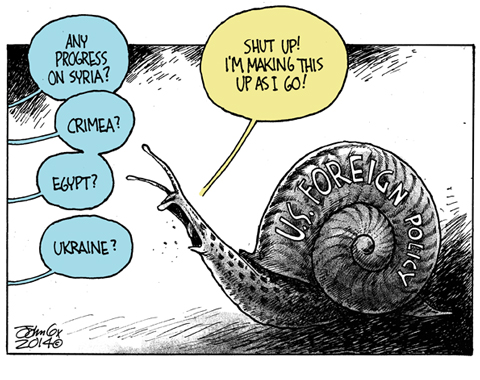 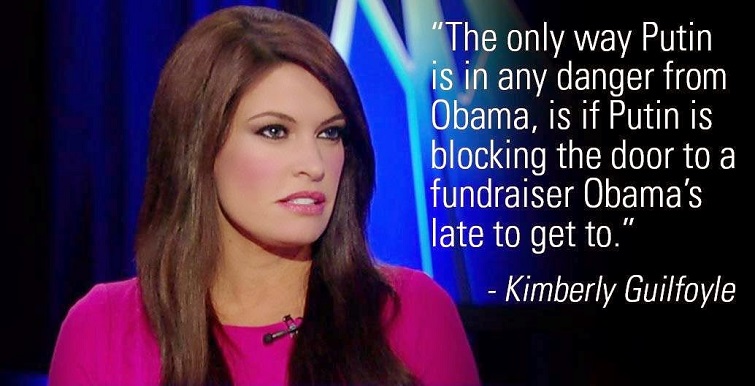 WASHINGTON — The United States has concluded that Russia violated a landmark arms control treaty by testing a prohibited ground-launched cruise missile, according to senior American officials, a finding that was conveyed by President Obama to President Vladimir V. Putin of Russia in a letter on Monday.

It is the most serious allegation of an arms control treaty violation that the Obama administration has leveled against Russia and adds another dispute to a relationship already burdened by tensions over the Kremlin’s support for separatists in Ukraine and its decision to grant asylum to Edward J. Snowden, the former National Security Agency contractor.

moreluck said:
So is a letter harsher than an e-mail or a drawn red line ??????

WASHINGTON — The United States has concluded that Russia violated a landmark arms control treaty by testing a prohibited ground-launched cruise missile, according to senior American officials, a finding that was conveyed by President Obama to President Vladimir V. Putin of Russia in a letter on Monday.

It is the most serious allegation of an arms control treaty violation that the Obama administration has leveled against Russia and adds another dispute to a relationship already burdened by tensions over the Kremlin’s support for separatists in Ukraine and its decision to grant asylum to Edward J. Snowden, the former National Security Agency contractor.
Click to expand...

We should nuke em! 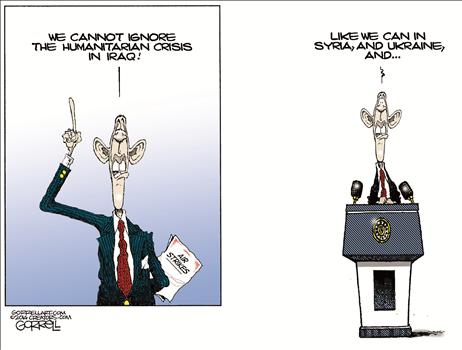 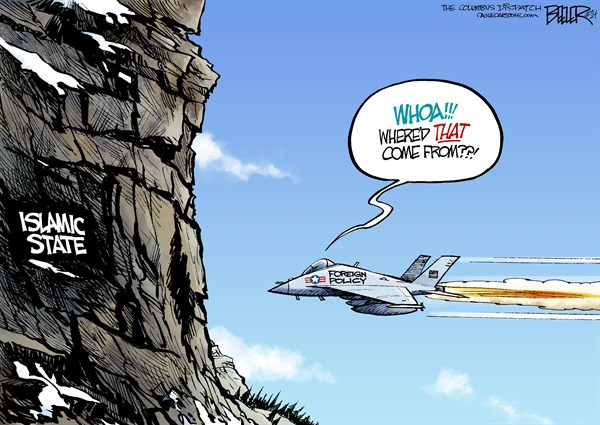 Saturday from the White House South Lawn, President Barack Obama blamed “intelligence estimates” for not anticipating the speed in which ISIS would capture large sections of Iraq.

The president,who has been under harsh media criticism for likening ISIS to an Al-Qaeda JV basketball team in January said, “There is no doubt that their advance their movement over the last several of months has been more rapid than the intelligence estimates and I think the the expectation of policy makers both in and outside of Iraq.”

The president also made clear no troops would go into Iraq during this operation of humanitarian aid and military airstrikes on ISIS.

Gen. McCaffrey is dismayed at the internal politics and useless pinprick bombing strategy. McCaffrey feels the strategy reveals “muddled thinking” and is only designed to make it appear as if Obama is doing something.

oldngray said:
Gen. McCaffrey is dismayed at the internal politics and useless pinprick bombing strategy. McCaffrey feels the strategy reveals “muddled thinking” and is only designed to make it appear as if Obama is doing something.

The Kurds seem to think the bombing is a big help:
Reinvigorated by American airstrikes, Kurdish forces retook two towns from Sunni militants Sunday, achieving one of their first victories after weeks of retreating, a senior Kurdish military official said.

I think the Kurds are hoping for more and continuing support. Probably a bit naive on their part because one of the US's biggest mistakes was leaving them hanging in the past when they tried to fight Saddam. Supporting the Kurds definitely makes the best sense from the US point of view but any US aid has been very inconsistent.
Share:
Reddit Pinterest Tumblr WhatsApp Email Share Link
Top