UPS driver busted for stealing shipments of firearms, selling them on black market 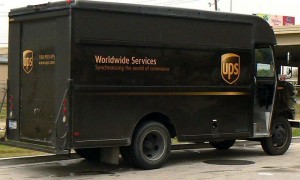 A 36-year-old former delivery driver for UPS was arrested Friday and facing federal gun trafficking charges after he allegedly stole multiple shipments of firearms, jewelry and cell phones from a company’s shipping hub in Ontario.

“This is an unusual case,” said Carlo DiCesare, Riverside’s special assistant U.S. attorney prosecuting the case. “It was a large number of firearms that were stolen, and they were stolen from a reputable shipping company.”

Curtis Hays was said to have taken multiple packages, containing more than 70 guns, which were supposed to be delivered to Turner’s Outdoorsman in Rancho Cucamonga, California, back in 2012. Hays instead handed the firearms over to 35-year-old Dennis Dell White Jr., of M Valley, who in turn illegally sold the guns, which included 12-gauge shotguns and .45-caliber handguns.

A 16-count indictment against Hays was filed on July 23. Hays was arraigned in federal court the day of his arrest, which took place without incident, and White is also due to be arraigned within the next few weeks.

If convicted, both the stolen goods charge and the conspiracy charge could result in up to a five-year sentence and each individual weapons charge could carry a penalty of 10 years. Additionally, White could face an extra 10 years for being a felon in possession of firearms and ammunition.

Authorities said they became privy to the illegal activity when they were contacted by Turner’s Outdoorsman explaining that they were missing several firearms shipments, which typically were shipped from out-of-state gun manufacturers and processed through the Ontario facility.

“Certainly there is a huge market out there,” DiCesare said of black market gun sales in the state. “What the full extent of it is – I don’t know if anyone knows.”

There is already another thread about this.

oldngray said:
There is already another thread about this.
Click to expand...

ah danggit,my search skills must be lacking. had a long day
ok move along nothing to see here!

This clown really did go off half cocked.

It said former UPS driver. I wonder when he quit/was fired and how long he drove.
A

oldngray said:
It said former UPS driver. I wonder when he quit/was fired and how long he drove.
Click to expand...

He was a no voter!
B

Lol. What a dum dum (want gum gum). Why risk a driving job for that.....annnd if hes gonna do something like that...do it so it can be traced back to him....annnd if he stole 70 guns he probably didnt take all of them at once. Didnt think anyone would catch onto his cash cow?