I found an article in 2014 about the last contract (took 10 months to get our retro pay) and it stated Hoffa was considering retirement then. No proof but I'm guessing this is his swan song and he gets a golden parachute somehow from UPS. He KNOWS there is NO WAY he'll get re-elected after this mess! Despite Local 'No' Votes, Teamsters International Declares UPS Contract Ratified | Labor Notes

If this contract stays ratified I'm guessing the next one is going to be pretty intense! With new leadership there's a strong chance of a strike in 5 years.

Here are my insights from the voting environment in Tempe, Arizona. Already slapped it on UPSers and Teamsters Facebook :

This is bad for UPS to have disgruntled workers for 5 years and worse for the Teamsters since the majority of voters saying NO isn't "unity". I was one of the few at my hub with Vote No flyers on my car window. My top 3 reasons for voting no is the insult of having new P.T. hires getting a $3.50 raise in one day (start at $14/hour from $10.50) and we get ZERO for a catch up raise, not even a quarter a year! Then the GWI for year 1 is 70 cents, the exact same year 1 GWI ten years ago even though the starting wage was way less. Third reason is probably the only reason some full-timers voted no, the 22.4 "combo" job which in our hub will be all driving, zero hub work. For the honor of working all weekend these drivers will make 25% less pay. All people heard in the building from management and the local was Vote Yes constantly. Unless a co-worker looked up information online about the contract or talked to me all they heard was one side of the story. I don't remember management promoting the contract this hard 5 years ago, I think it's because they REALLY want the 22.4 job bad! There was strange miscommunication in our hub as supervisors were telling members that not voting equaled a NO vote which definitely was not true! I doubt that impacted the voting % much but if that misinformation was going around nationally it didn't help. I think a lot of part-timers don't keep track of their address the union has on file as we get our checks in the hub. A lot of them can't even log into UPSers so it doesn't surprise me many didn't get their ballots. Some voted Yes hoping it would impact how soon they would get their 2018 GWI....wrong! Last time it took ten months to get it and it will likely take at least 4 months to get all supplements ratified so if that was their only reason it was a wasted vote. Of course it sadly didn't matter and their vote at least helped the turnout. Five years ago there were several supplements voted down with less than 50% participation and less than 2/3 voting no and those were given a new negotiation and vote. HOW did things change all of a sudden? Also, if the union knew this could happen they never publicly promoted this. It's like Blockbuster renting you a movie and never mentioning late fees (but it's in the small print). Yes, they did promote voting in general but if you tell us less than 50% turnout is an automatic Yes vote I would hope people would take it more seriously. Want to know how ashamed the Teamsters are about this? Go to their Facebook page, they have 13+ posts since 10/6 (day after vote and forced ratification) NONE about the UPS contract! I find it hard to believe MGM warehouse and Frontier Airlines are bigger contracts than UPS? Yet they are touting those and others preaching "unity". Btw, most of the responses in those posts are upset UPS teamsters LOL.
N

Interesting! UPSers.com pulled the contract ratification info for now. Could be they didn't like all the comments....HOPEFULLY because the union said "not so quick"
N

Just to prove I practice what I preach! EVERYONE with a vehicle had to walk past my car. Luckily I never had to change a tire or window after doing this 4 times with different flyers. 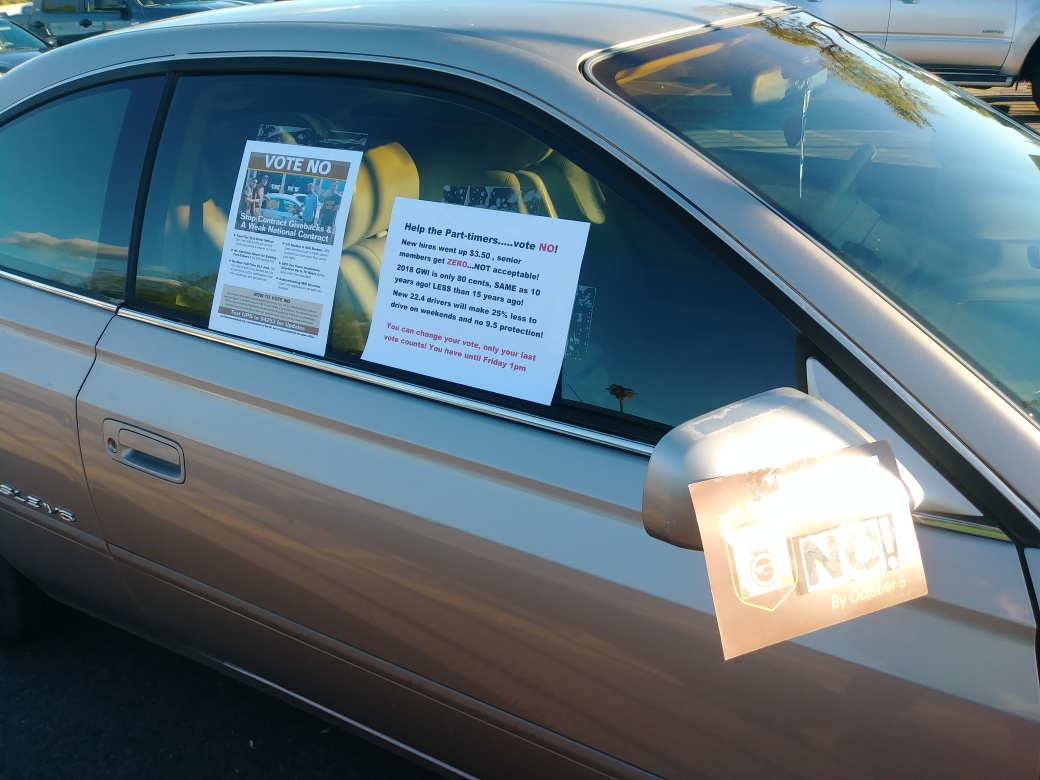 The right to strike

Contract proposal: Abolish all "no strike" clauses from our contracts