I guess the PC crowd will have to adapt and change their verbal methods of condemnation of those men they call Neandethals when it comes to thoughts on and treatment of women. I guess now the bad word will be, "you homo sapien you!"

Does this mean the Geico commercials will change too?

yo we gotta fight the powers that be!:

"On this day in 1975, in a remarkable display of solidarity and determination, Iceland’s women went on strike for equal rights. They refused to go to their jobs, do housework, or perform childcare, all to show the importance of women in their society. Incredibly, 90% of women in Iceland participated in the strike. Of those, 25,000 women -- almost 12% of Iceland’s population at the time -- took to the streets of Reykjavik in a demonstration while other protests were held in towns across the country. The historic strike was called Women’s Day Off and it’s gone down in Icelandic history as the beginning of a dramatic change in the status of women -- and the first step toward Iceland becoming “the world’s most feminist country.”

Although the right of Icelandic women to vote was recognized in 1915, by 1975, there were still only three sitting female Members of Parliament, less than 5%. Across the country, women faced discrimination at work, including lower pay and fewer job opportunities. The progress being made in other Nordic countries, where women held 16 to 23% of parliamentary seats and had more recourse against discrimination, was frustrating women’s right activists in Iceland. A women’s group called the Red Stockings was the first to propose a strike, but it was initially considered too confrontational by many. After the event was renamed the Women’s Day Off and framed in such a way as to show the many ways Iceland’s women contributed to the country, it secured near universal support.

When the day of the protest came, many companies were forced to close for the day; schools and daycares kept their doors shut. Fathers ended up taking their children to work and easy to prepare foods like sausages were sold out in many grocery stores. Meanwhile, women took to the streets to listen to speeches and discuss how they could improve their nation. The majority of men were supportive of the effort: Styrmir Gunnarsson, who was the co-editor of the conservative paper Morgunbladid at the time, said, “I do not think that I have ever supported a strike but I did not see this action as a strike. It was a demand for equal rights… it was a positive event.” He added that "Probably most people underestimated this day's impact at that time -- later both men and women began to realize that it was a watershed."

Vigdís Finnbogadóttir says her life was particularly changed by the Women’s Day Off -- she would go on to become Europe’s first female president in 1980, a move she insists could not have happened without the protest. “What happened that day was the first step for women's emancipation in Iceland," she explained. "It completely paralyzed the country and opened the eyes of many men… Things went back to normal the next day, but with the knowledge that women are as well as men the pillars of society. So many companies and institutions came to a halt and it showed the force and necessity of women -- it completely changed the way of thinking.”

The impact of the changes that this show of power by women helped foster are obvious in Iceland today -- women now hold 41% of the seats in parliament and the country has been ranked number one in the world for gender equality by the World Economic Forum for seven years in a row. For her part, Finnbogadóttir, who served as Iceland’s president for 16 years, will always look back with fondness on that historic day when women stood together: “There was a tremendous power in it all and a great feeling of solidarity and strength among all those women standing on the square in the sunshine.” " 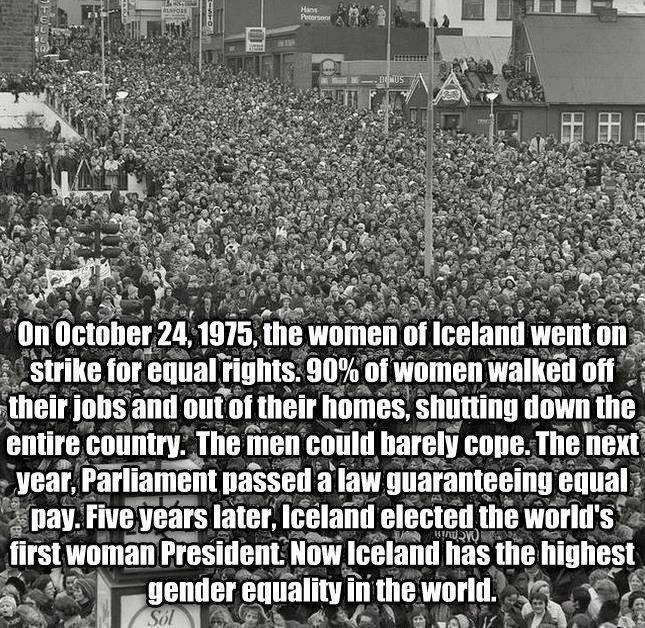 so possibly half the country shut down. we should shut our countries down just the same.

power never concedes nothing without a demand. voting trump or hillary isnt gonna change anything.

kind of an oxymoron? you cant have the highest gender equality. its either equal or its not.

sounds like the scale tipped the other way, might be time for the men to stage a walk out.

I guess that is why they are not around any more!
R

newfie said:
kind of an oxymoron? you cant have the highest gender equality. its either equal or its not.

yea i think men should go on strike for 40 + years of stagnant wages.

Hey--what happed to my video on Icelandic women? I thought it was very educational.

Was that your doings Butt?
R


US: 19% of women have been raped & 44% experienced sexual violence during their lifetimes http://bit.ly/2gvYJRT 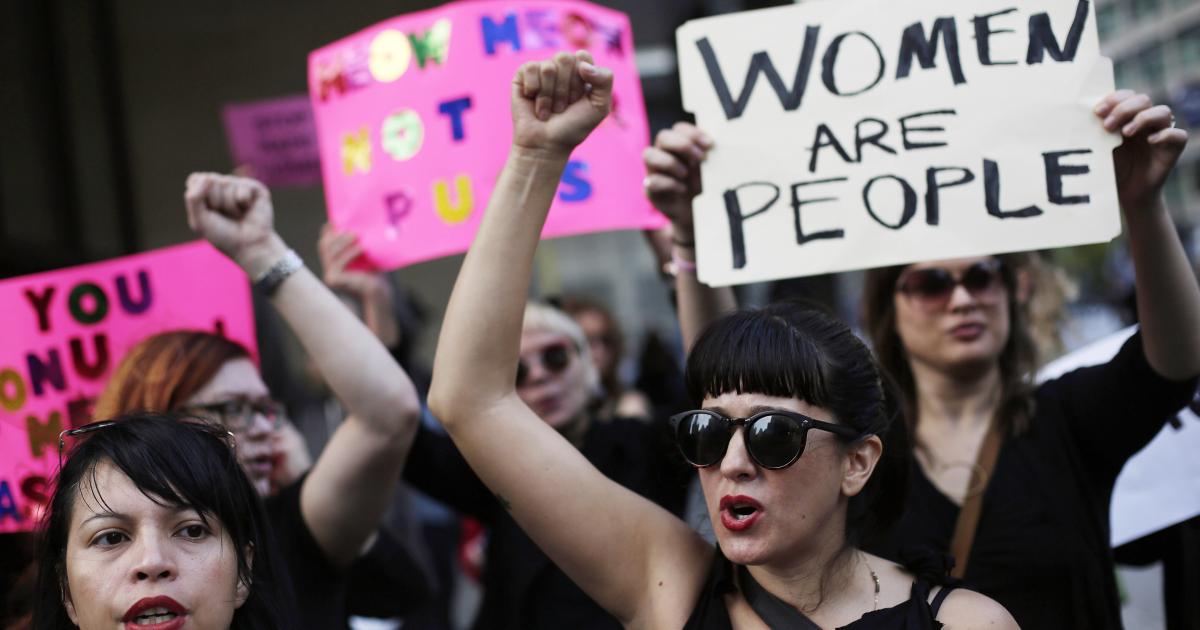 
US: 19% of women have been raped & 44% experienced sexual violence during their lifetimes http://bit.ly/2gvYJRT

Who many times have you been raped?

Monkey Butt said:
Who many times have you been raped?
Click to expand...

Do you find rape funny or is this a serious question?

bbsam said:
Do you find rape funny or is this a serious question?
Click to expand...

It was a simple question.
Why don't you go rape yourself?

Monkey Butt said:
It was a simple question.
Why don't you go rape yourself?
Click to expand...

What do you think I did all afternoon?

Am I'm the one being moderated for content. Cripes sakes....


US: 19% of women have been raped & 44% experienced sexual violence during their lifetimes http://bit.ly/2gvYJRT
Click to expand...

in this case we share a common problem but you chose to focus on the US rather then Canada?

I'm sure you deserved it.
R

newfie said:
in this case we share a common problem but you chose to focus on the US rather then Canada?

ahh human rights watch focused on US not Canada.

What is Canada hiding ?

what is Canada doing to fight this reign of terror on women?
R

newfie said:
what is Canada doing to fight this reign of terror on women?
Click to expand...

i wouldnt be suprised if we spend more money on imperial adventures with the americans which only creates more terrorism, than we do on policies to help women.

Monkey Butt said:
I guess that is why they are not around any more!
Click to expand...