Race the truck, but which one?

With the "Race the Truck" news for this season's Nascar promotion. I'm thinking Hot Dang, that must be the chopped, dropped an flamed package car I've seen setting on chromed low profiles in the newstalgiawheel print ads.

Automotive in our small building tells me it's time to wake up, as I'm dreaming again. Can anyone tell me if there is a connection between these two vehicles (other than they're both brown) or are they actually gonna campaign the black painted wheel with runs generic looking 20 + year looking clunker? 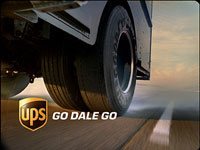 To prepare UPSs 2006 TV commercials for the popular Race the Truck campaign, the company ignored animation possibilities and instead built a real racing truck, starting with a 20-year-old, 250,000-mile workhorse UPS package car.

A team of highly qualified fabrication specialists transformed the old truck, dropping in a 514-cubic-inch factory Ford SVO crate motor that generates 620 horsepower and 700 pounds of torque. The engine, in turn, was fitted with a two-stage nitrous oxide injection system that boosts its output to 800 horsepower, allowing for low gear burnouts and an estimated top speed of nearly 150 mph on the track.

During NBCs Daytona 500 broadcast on Sunday, Feb. 19, viewers will get their first glimpse of the modified UPS package car in two new spots. What began as a way for UPS to create awareness for its NASCAR sponsorship has since grown in popularity as fans everywhere are ready for Jarrett to race the truck. But as with any good race car, theres testing required to get driver, pit crew and race truck ready.

Jarrett, driver of the #88 UPS Ford Fusion for Robert Yates Racing, puts custom-made Goodyear tires to the test as he maneuvers the UPS race truck in the first of the new commercials, Brakes. As Jarrett completes a lap and attempts to stop, team members discuss whether he has enough braking power to offset the momentum behind a four-ton vehicle. Jarrett begins fishtailing as he brings his speedy UPS vehicle to a halt, convincing the team of the need for adjustments.

Draft illustrates the force behind the UPS race truck by showing its effects on a father and his young son as they watch a NASCAR practice trackside. One car passes and blows their shirts; another passes and nearly causes the dad to lose his hat. When the brown truck passes, the boy is elevated horizontally as he holds onto his fathers hand to avoid being blown away. Subsequent commercials titled Burnout, Lug Nuts and Sponsor will debut throughout the 2006 NASCAR season.

This is the year when we seriously prepare the UPS truck for racing conditions, said Patrick Guilbert, UPS vice president of sponsorships and events. Just as weve expanded our capabilities to provide delivery and logistics services through our NASCAR sponsorship, were going to demonstrate our ability to transform the UPS package car for peak performance.
J

If you have Direct TV Tivo, there is a 4 minute clip on the main screen you can watch that shows a gutted P8 or P10. Some hot rod shop in CA puts a big v8, headers, suspension etc in it and runs it. Then they show it trucked across the country to the nashville speedway where they run it, spin the tires and do the burnouts like at the end of the race.
Pretty cool spot!
W

jeepguy63 said:
If you have Direct TV Tivo, there is a 4 minute clip on the main screen you can watch that shows a gutted P8 or P10. Some hot rod shop in CA puts a big v8, headers, suspension etc in it and runs it. Then they show it trucked across the country to the nashville speedway where they run it, spin the tires and do the burnouts like at the end of the race.
Pretty cool spot!
Click to expand...

Watched the clip last night and it was great. Not a big fan of Nascar but hope to see the full commercials.
F

Just Another in Brown

I like the one called "cars"
I think only (UPS)Drivers would appreciate that.

there is another truck its a p700 flamed with cromed rims (not duelly in rear) and has a high output v8 motor ,usually its photo'ed doing brake stands .If I find the picture again I'll post them