I recently visited Quebec city and was amazed at the way the city has maintained its old look and feel.It was kinda like going back in time.Theres a giant fort there called the citadel built to fight off an attack from the St. Lawrence river.It was never used.I found this site while googling and thought it was well written.
http://www.washingtonpost.com/wp-dyn/content/article/2005/12/29/AR2005122901412_pf.html

Interestingly funny. I harbor no malice against my neighbors to the north.

Cheers to my Canuk friends to the north!
Q

Many moons ago when I wore the green uniform, The US Army sent some "poor" souls up for winter warfare indoctrination, they looked fit they were bigger than us they were meaner than us, But they also froze faster than us... The greatest equalizer Canada has is her weather, try being a competent soldier at -52 celsius with the wind chill, I actually felt bad for the poor yanks we had been out for 5 weeks before they showed up. We were in our sweaters they were over clothed. So if you yanks want to invade make it in the summer, and we will make it last til febuary. PS we`ll keep the beer cold

What would happen when those French/Canucks make a country of their own?

the Canadian goverment probably would not recognize the results and would declare martial law. this was said on a radio show by one of the ministers for Jean Chretien. then everything would hit the fan.

so maybe that is the secret plan now. Let the frenchies and the british canucks have it out, then the stupid yanks move in on an already weakened force?

Wmac, it has all the earmarks of the CIA, dont you think?

Ah yes the thought of it all. One America, not north, not south, not Canada or Mexico, only America.

If only. It would seem that our invasion has begun from the south. Soon Texas, Arizona, Utah (where multiple marriages will be allowed) and a great part of California will become Mexico again.

So for those up north that speak french, while you have time this cold winter snuggling up against that warm fire, might as well learn spanish. it is heading your way.

One thing you are overlooking Dannyboy is that speaking either english or french is secondary to the fact that we are all Canadians.The french Canadians are have no ties to France.They are good people, and the term "frenchies" is more or less a derogatory term bordering on racism.
I hope quebec_driver understands that his being refered to as a frenchie is only the opinion of an uninformed American that thinks we want to join the union.We love our Country,and I know our brothers and sisters in Quebec will probobly never separarate,because only together can we get enough iceballs ready for when you attack~ 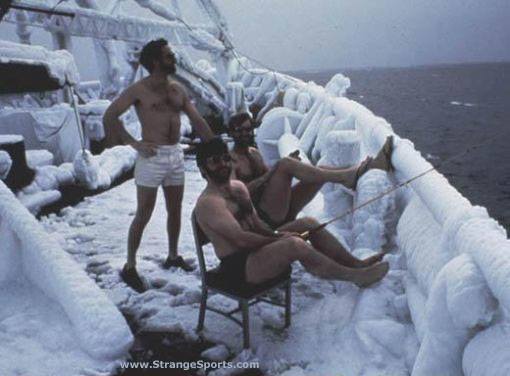 My mother was french, so no racial slurs here, just observations.

As to pitching iceballs, sounds fun, Ill bring the beer and hotdogs!

I hope that things work out for you guys north of the border. I remember history here when part of this country tried to separate and Washington and his men took all steps to keep the young union as one.

Interesting reading. One mans freedom fighter is another mans terrorist.

double_standard said:
I recently visited Quebec city and was amazed at the way the city has maintained its old look and feel.It was kinda like going back in time.Theres a giant fort there called the citadel built to fight off an attack from the St. Lawrence river.It was never used.I found this site while googling and thought it was well written.
http://www.washingtonpost.com/wp-dyn/content/article/2005/12/29/AR2005122901412_pf.html
Click to expand...

I'll agree with this post. I was in Quebec City about 20 years ago as a teenager (school band trip). I remember at the time really enjoying the visit. I would love to go back now and see how it compares with my memories.

My Father and Mother, both French, were both from Canda. They moved to Vermont, married and moved to Massachusetts and finally to Hartford Connecticut. We lived in a part of town called "Frog Hollow" for a few years. Everyone there spoke french and we attended a french school. All was well. Later on we moved into a project built for factory workers during WWII. Then we were living in a mixed neighborhood with half the project across the river, housing black people and the other half on the north side of the river a hodgepodge of nationalities all white.

My parents worked in Pratt Whitney which built aircraft engines for the war.
The "Yankees" in the neighborhood used to holler and rant all the time telling us to go back home so the out-of-work "Yankees" could get jobs again. Prejudice came mainly from the Irish and those unemployed native Nutmegers who hadn't had a good job in a long time. We had a few rocks donated to the family which were delivered thru our bedroom windows a few times. Times were tough but somehow all the kids grew up and we all moved away from all that despite the fact that our resumes and job applications in those earlier years reflected our heritage.

Inside, we were always proud we were French and from Canada but most of all because we were Americans. That is what sustained us.

Strange, the older I get, the more I think about the old days. Does that mean my life has started to flash by and I'd better be buying a plot???

I hope not. At our age, thinking back over times past (seeing your life flash before you) is totally normal and very therapeutic. It is what gives grandparents the healing hands for overstressed new parents.

It also makes it clear where we screwed up, maybe to learn from our mistakes for a change?

As for the hatred and reaction you posted about, have some similar.

Little town in Iowa that I grew up in (10-17 years of age), well it seemed like the town lost a huge bunch of citizens to the war. Town only numbered 356 or so during the time I was there, and I remember the town park where the names of many, too many dead, were remembered. And it would seem that the town kids had revenge on the Germans burned into them from an early age. (so I do understand how even to this enlightened day hatred against blacks and orientals still exists)

For many years I had to learn how to run faster than any one else, or be prepared to be beaten by 5 or 6. They never seemed to have an issue when they were one on one with me, but put them into a group.......

I guess that rapid pace served me well at UPS. As far as I know, the high school track record for the two mile still stands.

Last I heard, most of the crew are now either in jail, the worst one is a quadriplegic, and there was the time that they found 5 or 6 hanging in a tree just outside of town, radio's falling into the tub....that kind of thing.

Not really any fond memories back there.

No matter where you are racism is part and parcel of being human, I`m from mixed heritage, french on my father`s side and irish on my mother`s so growing up in Quebec in the 70`s was rough. I remember the OCTOBER CRISIS in 1970, martial law, soldiers in the streets. Both referendums, seeing the evolution of politics in Canada and Quebec. I still hear people come here and wonder why french canadians( or Quebecois) don`t speak WHITE. And then I think of what the french gave to this continent, a lot of exploration and settling , just look at Louisiana...

Yall want Louisiana? You can have her. Too damn $$ for us.

got a lot of cousins down there thanks to the british

I always heard the British had a hard time keeping the worm put up.

I would guess that New Orleans would not be the place it was were it not for the French culture inpact.

jules23 said:
I'll agree with this post. I was in Quebec City about 20 years ago as a teenager (school band trip). I remember at the time really enjoying the visit. I would love to go back now and see how it compares with my memories.
Click to expand...


Those women you knew back then now have started to form wrinkles,mustaches and pot bellies.

I went back to yellow stone and canada in 2002. Had been there as a 17 year old. It was as good or better the second time around.

Go back. it will be worth it!

We visited a relative in Virginia once that sold old man adams sour gum.
His kid was in the militia and he used gum for the 40 lb required weight,for the 10 mile hikes.
He called his dad "sir"...my father liked this ...not that this has anything to do with this thread
J

tieguy said:
Those women you knew back then now have started to form wrinkles,mustaches and pot bellies.

Well...I'm a red-blooded american girl...so I'd have to look for all the balding men with pot bellies now

although i will say back then those french-canadian boys sure were cute.
Q