Vice President Dick Cheney accidentally shot and wounded a 78-year-old man while hunting for quail on a ranch in Texas, U.S. television networks reported on Sunday.
Cheney's hunting companion, Harry Whittington, was "alert and doing fine" in the hospital after being shot on Saturday with shotgun pellets, CNN reported ranch owner Katharine Armstrong said.
Armstrong, the owner of the ranch where the weekend hunt took place, said Whittington was taken to Corpus Christi Memorial hospital, the network reported.
CNN said Cheney spent time at the hospital on Sunday with Whittington, a lawyer from Austin.

(Sorry, that was too easy to pass up!)

I'm glad the guy is OK and no doubt it was an accident but you know the jokes on Letterman and Leno will be zingers.

Good thing him and Bush can`t be in the same place at the same time.
Imagine the implications if he "accidently" shot the president!
Funny even a shotgun can be a WMD if you get on the wrong end of it.
T

Hope the lawyer is ok. There are so many jokes waiting in the wings; in the meantime: 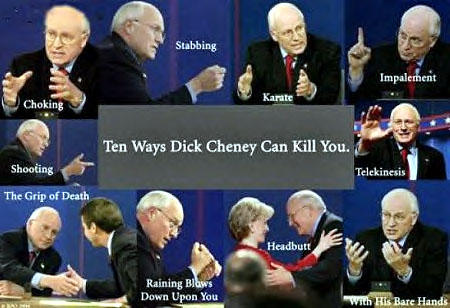 NO! NO! NO! I thought of this when listening to Drudge on the radio last night.

Leno does a video on Cheny but uses the AeroSmith song:

To the tune of Janey's Got A Gun!

And who said the ole guy couldnt hit the broad side of a barn?

Don't blame me , mac asked for it:
http://dickhunt.ytmnd.com/
T

Oh, what the hey, here's another: 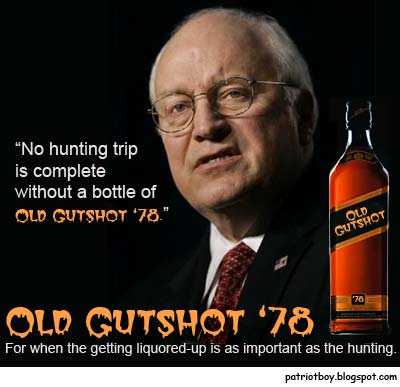 You know Letterman, Leno, Stewart, Conan, etc. will be all over this tonight. I know it was a tragic accident but I am glad the guy's OK and that we can laugh about it. Could have happened to anyone but I'm sure Cheney's thinking, "Oh God, why did it have to be me!" I'd never wish that on anyone.

You think the Washington Spindoctors will try and justify the shooting by saying the guy doned an Osama mask and jumped out of the bushes as Cheney?

Glad it seems to be a funny thing to joke about. Heard the shot hit him in the face and chest. Lucky it spared his eyes, but the rest of the face got buggered up.

In the press conference this morning (Scott ?), I heard the dumbest question come from the press pool. The reporter asked the press secretary, "Would this be a more serious matter had the man died?"
DUH !!!!

Cheney will definitely be fodder for the humor mill. Sadly, hunting accidents happen all the time. It's just that this one involved a famous person. It'll all wear off in a couple days when all the punchlines are thrown.

Conspiracy theory and full fledged senate impeachment hearings to follow. Won't it be terrific if the senate tied on the vote sending the tire breaking vote to none other than........

On second thought a republican was shot. Cheney will be awarded a medal.

And here's what the sheriff says in Texas if you shoot someone, but aren't royalty: "They mistakenly shot a human being," he said. "It's reckless. It's inexcusable."

Of course the White House joked about Cheney's hunting skills today after they knew about Whittington's heart attack. Classy.

No more jokes from me, time for some answers.

I'd still rather go hunting with Cheney then get a ride with Ted Kennedy.

You are so cold!

Jay Leno mentioned the other night that they arrested a 6 year old for sexual harrassment. Six years old.

His take was "Boy, those Kennedy kids sure do start young!"


Jay Leno mentioned the other night that they arrested a 6 year old for sexual harrassment. Six years old.


It's true. I was so shocked when the story aired on TV and they interviewed the kid's mom that now I can't remember the specifics. A 6 year old and sexual harassment? I guess they teach 6 year olds different today than when I was 6! Only thing about girls that was harassment when I was six was pulling their pigtails and running like hell before they knocked the snot out of you. LOL!

Don't fret ladies. If I remember right you gals always did well in getting us boys back at some point or another.

When I got older and grew my hair long one of them got me back when I had it in a ponytail one day. It hurt so bad I've been with her for the last 30 plus years!

Funny how love works! See you always get the best of us in the end no matter what we do!
LOL! Yeah and we love it but just won't admit it in public.

Cheney on Fox tonight at 6 pm. I think it a mistake to do Fox only as it will get sold to the public as a home court interview but hey it's their decision and they'll go forward with it.

Turns out the situation was more serious than first reported and with the victim having a heart attack, it just took much of the humor out of it for me. Hope he makes a full recovery and in the end we can all laugh about it together. Just a tragic accident where it's probable (that's JMO) that both men made major mistakes in proper hunting etiquette. Communication and respecting shooting lanes.
Share:
Reddit Pinterest Tumblr WhatsApp Email Share Link
Top