That goldanged ole Muslim Socialist Pinko Commie Kenyan is RUINING THIS COUNTRY!
http://dealbook.nytimes.com/2014/07...-outpaces-economy/?_php=true&_type=blogs&_r=0
The stock market, continuing a remarkable ascent that began in the darkness of the last recession, surged past a milestone on Thursday after a strong jobs report indicated that the economy might finally be gaining steam.

The S.&P. 500 is now nearly three times its low point in 2009, when the economy was in free fall and the government was scrambling to shore up the financial system. When adjusting for inflation, however, the S.&P. 500 is still below its peak in 2000.

The stock market’s rally has taken place even as a tepid economy has failed to lift the incomes of many Americans. The economy unexpectedly shrank in the first quarter. Still, there are signs that economic growth is starting to pick up. The stock market records were set after the government announced on Thursday that the economy had added 288,000 jobs in June, more than analysts had been expecting.

“While the economy has been slower than people would have liked, there are signs that it has continued to improve,” said Shep Perkins, a portfolio manager at the Putnam Global Equity Fund. “You could see the S.&P. at 3,000 in three to four years.”

The current bull market has lasted nearly 64 months, making it the fourth-longest since the crash of 1929, according to an analysis by S.&P. Dow Jones Indices. And in recent years, the United States stock market has substantially outperformed those of Europe, Japan and China.

Some individual investors have benefited from the rally. The value of stocks and mutual funds held by households increased by more than $3 trillion in the 12 months through March, according to data from the Federal Reserve. But such gains will have mostly gone to the wealthier households, where stock ownership is concentrated. “The trickle down is not working,” said Douglas Kass of Seabreeze Partners Management, a hedge fund firm. “The schism between haves and the have-nots has widened.”

Stronger corporate profits have helped sustain the rally. Some companies have bolstered their bottom lines in part by restraining expenses. But investors seem most excited about younger companies with strong growth prospects. Stock in Facebook, for instance, has risen more than any other in the S.&P. 500 over the last 12 months, soaring 170 percent. Netflix is up 114 percent. “Innovation has been a huge driver,” Mr. Perkins, the mutual fund manager, said.

Reflecting the excitement about a new wave of technology shares, the Nasdaq index has climbed strongly, closing at 4,485.93 on Thursday, putting it a little more than 10 percent below its peak in 2000 during the technology bubble.

Still, some investors question whether the stock market can hold on to its gains.

One of the most surprising features of the most recent bull market is that it has taken place during a drawn-out period of economic sluggishness. During the extended rallies of the 1990s and the 2000s, the economy grew at about 3 percent a year, double the growth rate of the latest ascent.

And not all investors are convinced that growth is poised to accelerate. The mood in the bond market, for instance, is circumspect. The yields on bonds have fallen this year, indicating that investors believe the Fed will have to keep interest rates low to prevent the economy from stalling. The 10-year Treasury note closed on Thursday with a yield of 2.65 percent, down from just more than 3 percent at the end of last year. “This demonstrates that bond investors are skeptical about the economic recovery,” Timothy M. Ghriskey of Solaris Asset Management said. “And rightly so, because we saw a weak economy in the first quarter.”

To stimulate the economy, the Fed has pumped more than $3 trillion into the economy and the banking system since the financial crisis. But some investors assert that this stimulus has helped generate speculation in the stock market while having a limited effect on the real economy. “There has been no escape velocity in the economy,” Mr. Kass said. “We are dependent on the kindness of the Federal Reserve.”

As the economy recovers, the Fed is gradually injecting less money into the financial system. If profits and the economy grow robustly, stock market investors may not care that there is less monetary stimulus. But if the withdrawal causes a tightening in financial conditions, the appetite for stocks might dwindle.

For now, however, financial markets have been trading with little volatility. The Federal Reserve Bank of St. Louis said on Thursday that its “financial stress index” was at a record low, which means investors in many markets are not worried yet.

But to some analysts, the market is too calm.

One big question that skeptics have is whether the rally has made stocks overvalued, and potentially vulnerable to a decline. There are many ways to assess how expensive stocks are, and bullish and bearish investors often use different yardsticks to make their case.

Optimists, for instance, note that the stock market value of the companies in the S.&P. 500 is 16.5 times the 2014 profits that analysts expect for those firms. That ratio is not particularly high by historical standards, they say. “Valuations are not extreme by any means,” Mr. Ghriskey said.

And Gerard Minack of Minack Advisors says that he has noticed a particularly disquieting feature in the latest rally. During past peaks, even though some stocks were significantly overvalued, many others had attractive valuations. Now, he says, almost no companies in the S.&P. 500 are real bargains. “What is cheap is cheap for a very good reason,” Mr. Minack said. “Everything else is rich or fully valued.”

The stock market’s optimists, however, say such concerns are overblown. Corporate earnings, they say, could post substantial gains if the European and Asian economies bounce back. “That has to be the hope of the equity markets,” Mr. Ghriskey said.

Look how excited the puppets feel on the subject!! oh wait.. 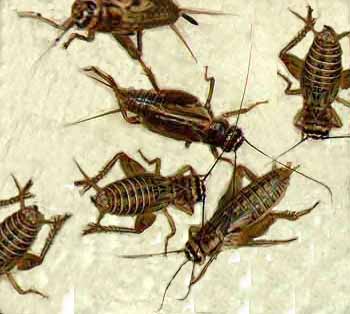 With a strong June jobs report, and more indicators that our economy is rebounding, look for the stock market to continue it's upward climb.

How many of those jobs are full time ? The lowest job participation rate since 1978 !

Great indicators.
The stock market is strong in spite of the idiot in the white house.

The stock market is strong Because of the Economic Plans issued by the man in the white house.
Last edited: Jul 3, 2014

Obama's use of Deficit Spending,as well as his Stimulus package passed in 2009 has slowly but surely restarted the economy and the gains made this year will pale to the gains that will be made in the coming year.
folks hold on to your hats as the Housing Market is showing HUGE gains as well!!!!

You have no right to change my words., Felicia!!
I'll report it the next time you try that slimy move.

moreluck said:
How many of those jobs are full time ?
Click to expand...

Why don't you tell us the exact numbers?

Annoy a liberal today. Hit them with facts.

You are such an Obama cheerleader that it's actually quite funny watching you get all excited over the least little bit of good news about the economy.

How many Americans are out of work?
On food stamps?
On welfare?
In public housing or have subsidized housing allowances?

You keep on going with that GIVE ME AN "O" crappola. Let me know how that works out for you.

I asked the question first.......answering a question with a question is an old political ploy from way back. It means you have no answer !!

moreluck said:
You have no right to change my words., Felicia!!
I'll report it the next time you try that slimy move.

moreluck said:
I asked the question first.......answering a question with a question is an old political ploy from way back. It means you have no answer !!
Click to expand...

here you go,and I think you'll like it even more since Rachel Maddow reported it
http://www.msnbc.com/rachel-maddow-show/emphatic-answer-the-where-are-the-jobs-question 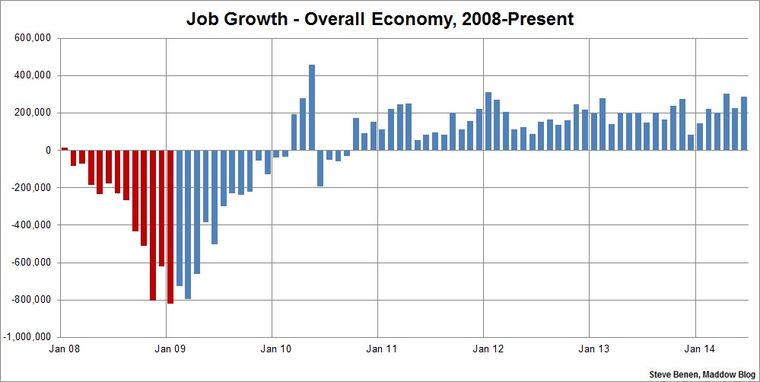 There was some cautious optimism in advance of this morning’s new job numbers, but few expected the data to be this good.
The new report from Bureau of Labor Statistics shows the U.S. economy added 288,000 jobs in June, well ahead of forecasts. The overall unemployment rate, meanwhile, dripped to 6.1% – its lowest point since September 2008, nearly six years ago.
For the fifth consecutive month, public-sector layoffs did not drag down the overall employment figures. Though jobs reports over the last few years have shown monthly government job losses, in June, the private sector added 262,000 while the public sector added 26,000. The latter may not sound like much, but after several years in which that total was negative, it’s heartening.
As for the revisions, April’s totals were revised up from 282,000 to 304,000, while May’s figures were also revised up, from 217,000 to 224,000. Combined, that’s an addition 29,000 jobs.
Overall, the report suggests the jobs landscape is clearly improving, which is no doubt proof that American employers are in on the conspiracy to distract Americans from Benghazi.
All told, over the last 12 months, the U.S. economy has added over 2.49 million jobs overall and 2.43 million in the private sector. What’s more, June was the 52nd consecutive month in which we’ve seen private-sector job growth – the longest on record.
At this point, with the year about half over, 2014 is currently on track to be the best year for U.S. job creation since 1999.
The MaddowBlog, Charts, Economy and Jobs
facebook

My words stay and if you have "facts" post them in your own post under your own name. I asked a mod to delete your little slime smear.

Stock market increases mostly means the rich get richer and the poor get poorer. The wealth gap between rich and poor continues to increase under Obama.

Where does it tell how many are full time and how many are part time?????? Thanks for clearing that up Rachel.....what a guy.

moreluck said:
My words stay and if you have "facts" post them in your own post under your own name. I asked a mod to delete your little slime smear.
Click to expand...

ahhhhh that's truly funny. i'll save Hoax the trouble and take full credit for the Correct post i posted. I rather doubt anyone would confuse you of making such a post lol

oldngray said:
Stock market increases mostly means the rich get richer and the poor get poorer. The wealth gap between rich and poor continues to increase under Obama.
Click to expand...

WRONG! it is narrowing the gap from the 2008 Recession that had its beginnings in 2003-04 when Dubya was president and he nearly bankrupted the country.

75 Percent Of Jobs Created This Year Were Part-Time Due To Weak Economy, Obamacare Concerns

Thanks for clearing that up Rachel.....what a guy.
Click to expand...

why are you being so homophobic? That shows me you have no facts,nothing to stand on so you make thinly veiled Homophobic jabs.

UPS has a lower bar to hurdle to impress investors. Can it deliver?

United Parcel Service (UPS) Stock Moves -0.72%: What You Should Know

UPS (NYSE:UPS) Pays a Generous Dividend which is well Covered by Cash Flows