Staff member
Don't worry about it. They already asked if you had violations, and you answered honestly. They probably have already checked your DMV record.

They check it every year. Every year we fill out a form and enter any violations in the past year. Next time you get this, answer it honestly. Fill in the date of your violation. Don't ever lie!

(But don't volunteer anything extra!)
D

Did you get a ticket in the package car? LOL! No, that's not funny.

Don't worry about it. I got a ticket a week before I went to class and freaked out. First ticket in 20 years and I was on my way to work. Got stopped right in front of the center and felt foolish. Cost big bucks too.

I just listed it on the paperwork they gave me about violations and nothing was ever said. You've already filled out the paperwork so let it go. Don't say a word about it. Just take it easy on the gas and drive safe! Best of luck, dw

Staff member
I got pulled over for speeding in my package car once. He didn't ticket me, but it was very embarrasing. The fracken Fedex driver told everyone on my route!
U

Thanks guys for the input.

Take defensive driving, then you wont have any violation on your record. No need to tell anyone, or report anything if you do that.

Call your local dept of motor vehicles and ask if a ticket for going less than 15 mph over the posted speed limit in a non-commercial vehicle will appear on your record if you plead guilty, or no contest, and pay the fine.

It seems I heard that it won't but then I was told a story by a person who was given a ticket for 10 over the posted speed limit, in his personal vehicle, who was told specifically by the cop giving the ticket that it wouldn't. This guy then called the DMV and, sure enough, it appeared on his record.

I think "1980" is correct. You have to report any moving violation within 30 days "of conviction". If you can figure out how to get it reduced, dismissed or expunged then there is no "conviction".

The poster who suggested the state approved defensive driving course may have a really good idea. When you call the DMV with the question about "....does a ticket for 10 mph over the posted appear on my record if I plead guilty and pay the fine?", I would also ask if going to a defensive driving class would expunge your record.

Do what the upper management trained you to do.Lie tell them you did nothing wrong it wasn't your fault.Never admit fault thats what I was always taught in any saftey training.Never admit to nothing.Hire a attorney and plead NOT GUILTEY.Thats what the people with lots of money due.After all you didn't break the law the law is wrong.Accidents don't happen people create them.The more money you have the more you can get away with.ASk BIll Clinton.

Staff member
Back before I went driving about twenty-five years ago, I did a "rolling stop" at a Stop Sign while driving my personal car. It was a slow revenue day, and I was ticketed by the local constable. I went to Court and pled "Nolo", which I think means guilty with a reason. I explained to the Judge I was up for a job promotion, I paid a fine and it didn't show up on my Driving Record. I don't know if they still allow that though. I got the job.

"nolo contendere" means "no contest", essentially it means you will not contest the charges against you.

Will that keep the ticket off your record if you plead "nolo" and pay the fine? I don't know but that may be something the affected individual may want to ask the DMV (dept of motor vehicles) or DPS (dept of public safety).

If that doesn't work try getting an attorney to fight the ticket. Considering your good driving record my guess is the worst thing that could happen would be that he gets 6 months probation.

Ask for deferred adjudication. You will pay a fee but it will not go on your record if you do not have any violations in that town for 90 days. That is usually how the attorneys do it. But you can ask for it yourself.
B

I was ticketed by the local constable.....

Look at the bright side! Least you did'nt hit anything..

I find it helps to know where they are before they see you. I use one of these and never had a problem picking up a cop way before they could get me. This particular model saved a buddy of mine from getting a 110 mph speeding ticket! I know you can't use it in the package car, but in your personal car it could come in handy. 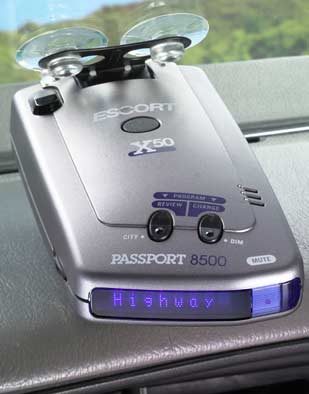 I would also tell you to look into a deferral program as well. Some places have it where if you are willing to pay a little extra $$ and promise to be good for a year they will dismiss the ticket if you have a clean driving record already. They have deferral programs in every county in my state, and I have known people to have multiple tickets in multiple counties all on deferral so they never find out about one another!

I've heard that "instant on" radar that doesn't emit a standby signal makes radar detectors useless.
Also if you're the only one on the road they(detectors) may not help.
Supposedly the only thing a detector will do for you is give you a little extra time to make up your story.
But I could be wrong........

trickpony1 said:
I've heard that "instant on" radar that doesn't emit a standby signal makes radar detectors useless.
Also if you're the only one on the road they(detectors) may not help.
Supposedly the only thing a detector will do for you is give you a little extra time to make up your story.
But I could be wrong........
Click to expand...

trickpony1 said:
I've heard that "instant on" radar that doesn't emit a standby signal makes radar detectors useless.
Also if you're the only one on the road they(detectors) may not help.
Supposedly the only thing a detector will do for you is give you a little extra time to make up your story.
But I could be wrong........
Click to expand...


Instant on radar can catch some cheaper radar detectors off guard, but with the passport 8500 I have not been caught by surprise when instant on radar was in use. It has a 2.5mi. detection range, and unless your on the darkest least used country roads there is more than likely a car within 2 miles of you that it can pick up being hit Most cops around here just sit off the side of the road with thier radars on, so picking them up is a peice of cake. About the only type of radar you have to be worried about is lasar, but it has so many limitations I rarely see it used.
J

Staff member
I know this sounds crazy, but you could try obeying the law and not driving over the posted speed limit. My understanding is that it's a pretty good way to avoid speeding tickets, and it's cheaper than a radar detector

Jones said:
I know this sounds crazy, but you could try obeying the law and not driving over the posted speed limit. My understanding is that it's a pretty good way to avoid speeding tickets, and it's cheaper than a radar detector

That's a really good idea!!
At my next staff meeting I will try to inspire my chef, butler, housemaid, lawnboy and personal valet to work a little harder so that I'm not in a bind when it comes time to go somewhere.