Thanks BC Community, no thanks UPS, not today.

Will try not to novel.

First time jumper. Great peak. Was actually super fun. Worked all days until Xmas. Obviously staffing was right across board, weather remarkably ok for Northern climes, and stumbling across BC made my time & life the last six weeks remarkably easier. It should be mandatory for all seasonals and newbie Union to peruse BC for two weeks. You all, between suffering fools & enduring Upstate/Dave, dispense invaluable wisdom (if not marginally funny jokes) & if you can follow the good ones, get candid & informative access to the amazingly consistent culture of UPS. So, much thanks and you have no idea the help. It's sad to me that it is obvious people at my center do not have strong Union knowledge or brotherhood. They accept from management most of what you BC'ers know your previous Union members fought so hard to prevent. Rail on against management, sure, but the propaganda of the owner/management class has rendered many of the labor side clueless as to what a strong labor union can and should do and provide.

Anyway, thanks BC. You became a constant friend/ally/foul-mouthed, no punches pulled big brother/sister that I never wanted but sorely needed.

I got to jump with my friend, who was a constantly picked on new cover driver. It was great. I suppose my sheer ability to speak sentences & physically show up everyday made me an ok helper but I quickly found I was untouchable. We bulked a cattle car to drop off for our town's major industry until 10:30 (always bricked, excellent workout), humped a 120-170 1/2 business, 1/2 resi (most resi in my neighborhood, childhood neighborhood), back for bulk pickups. A little of all to break monotony.

Had to finish stops with temp sometimes. Last day, finished with center manager because he messed up badly with helper placement that day. He tried bitching about my friend for the first three minutes until it was obviously he had no clue about the route and finally conceded control to me and shut up. He was trying to follow the totally wrong and inept Orion route (we were always coming in under by completely ignoring stupid route, not running or taking shortcuts, simply working together for maximum efficiency). It was priceless (ok guy but late peak,). I just pointed out the numerous driving errors he was committing and all he had left was to threaten letter about dirty cab. I said all the lunch stuff & soda bottles were mine. He about lost it with nothing he could do.

Anyway, just wanted you all to know how much this nothing jumper appreciated the tough love, the honesty, the comradeship. It's a rarity. I came away so damn impressed with the mental and physical grind, not to mention doing that while giving the best customer service possible (20 year bartender, I know customer service). Amazing.

Today, however, heap your scorn. -7, -35 wind chill. First call since holidays. Haven't been asked to turn in my ridiculous pullover (2XL pillowcase with arms to my forearms, 6', 165 lbs, seriously UPS?!? Who designs these? How many T-Rex's are there for helpers?). Jumping with the man they call Jackrabbit. Record times, I don't get to touch my DIAD, & he refuses to let me talk to his customers, breaks all kinds of driving laws, talks endlessly about all the things he knows the other drivers don't.. All this for 2-3 hours until he unceremoniously dumps to head rural. No Thanks! Couldn't pay me enough. Thanks BC, maybe see ya next year (unless I stupidly decide to add preload to my summer workload, arrrrggggh, they are setting the hook. Still. Time. To. Escape).
Last edited by a moderator: Jan 6, 2015

Doesn’t have a Member

You lost me at the.wall of text following your promise to try and be brief.
U

Well, never promised & I got

from BB. All in all, exactly the point of it. Thanks for being you. 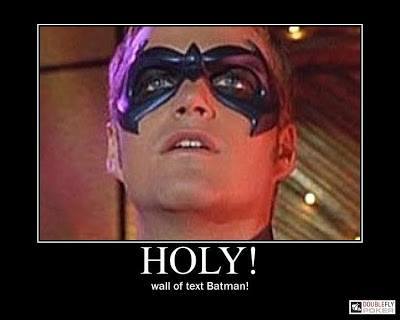 that was a novel, glad BC was there to bore from it.
P

Pretty good read once you get through it. Having the right driver/driver helper combination is important. I had a great one last year. After a couple days, if UPS had taught her to drive the truck, she could have ran the route herself.
C

Just imagine if the op had not been brief!
Will have to wait for the minseries, dont have a week to read it all!
U

Haha! Good old BC community. 6 complementary paragraphs = too boring to read. 1,000 mini paragraphs of replies = too bored to not produce. Expected nothing less, nothing more.

unpaddedjumpseat said:
Haha! Good old BC community. 6 complementary paragraphs = too boring to read. 1,000 mini paragraphs of replies = too bored to not produce. Expected nothing less, nothing more.
Click to expand...

Welcome the land of mediocrity.

The less said the better. I'll leave it at that

unpaddedjumpseat said:
Haha! Good old BC community. 6 complementary paragraphs = too boring to read. 1,000 mini paragraphs of replies = too bored to not produce. Expected nothing less, nothing more.
Click to expand...

We are what we are.

"Marginally funny"? Are you kidding us pee-wee? This is top shelf!
U

In the immortal paraphrased words of upsguy72, less said the better (seemingly unaware of the 5,000+ posts to the name).

In the immortal paraphrased words of upsguy72, less said the better (seemingly unaware of the 5,000+ posts to the name).

Stick around. You'll do well here.

Leave the gun,take the cannoli

I laughed I cried...

Made my thirsty for a beer.

Apr 27, 2022
ThisIsNotYichen
T
M
Leaving UPS and being paid for time left over