Government Warning regarding purchase of UPS uniforms:
There has been a huge purchase, $32,000 worth, of United Parcel Service (UPS) uniforms on eBay over the last 30 days. This could represent a serious threat as bogus drivers(terrorists) can drop off anything to anyone with deadly consequences! If you have ANY questions when a UPS driver appears at your door they should be able to furnish VALID I.D.

Here we go again with this hoax

Ah yes the urban legend returns... please tell me what is a Valid ID? Cause we have none in our center, as with many other smaller centers around the country, UPS saves costs by not issuing them where not needed.

Staff member
That is so old.
Actually it was not a hoax,(even tho snopes said so) people were selling them and they were being bought for large amounts of money. Actually I still have pages of sales I copied off ebay as I was worried about it when I saw them being sold when I was looking for socks. But it was corporate buying them off the board to keep them off the street, and then they changed the logo.

So it wasnt terrorist, it was UPS protecting their logo. And You cant do it anymore as of approx, 02/03. And I hope all the people selling them got charged with fraud as they should have.

Our center got valid IDS shortly after. I kept getting asked for mine after this letter about it appeared and was sent to most companies around the country. Including the US military. It was supposedly sent by Homeland Security, but there was no Kimberely Bush Carr at HS, so I dont know where the letter originated, but its bogus, and if you just found it good thing it wasnt totally true.
Last edited: Nov 13, 2006
J

I wasnt sure if it was real or not so thats why I posted it.

JaxHubPreLoader said:
I wasnt sure if it was real or not so thats why I posted it.
Click to expand...

Good plan....The sky is falling, the sky is falling. This rumor has been around for years. Probably put out there by Fed Ex. When they start selling UPS trucks on E-Bay I will become concerned. Chill.........

would you buy a used car from this man? 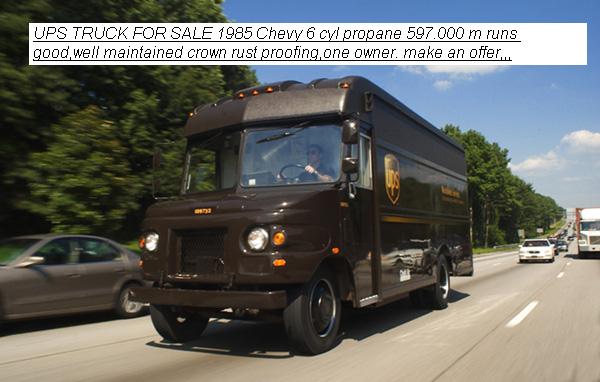 Good article, didnt see the new and revised version til now.....like I said......
And actually there was a truck on ebay, in bath ohio. Somehow it avoided the normal crushing, and it was early fifties, and God knows we dont have any like that on the road.hahaha heheheh I gave it to my manager in turn who told me I needed a higher dispatch so I didnt have so much time to be online............I think I still have that listing also.

If you think back to 9/11, how we were told to guard our vehicles and our garments, ie dont leave them in the front of vehicle etc. The possibility to gain access to sensitive places, is high. Who gets the wave thru more than us? We need to be aware people, this may have been a bunch of fetish buyers, and UPS may have got them all, but if you see something weird, dont be paranoid to say something and if your center doesnt listen go above their heads. Homeland security listens, and so does the FBI.

All I know about uniforms is that they make one hell of a bon-fire at a retirement party. I burned about 6 armloads at my party. Offered to turn the pants in (about 15 pair) but management didn't want them.

Lately it takes an act of god to get any uniform items. People are starting to file grievances. Our district is "cutting costs" so now it takes weeks, or more, just to get shirts, or pants. Maybe I should try Ebay.

You can do a completed sales seach on e-bay to see what items have sold for in the past 90 days. Guess what; not even one uniform. We were told a few years ago that UPS watches e-bay for any uniforms that come up for sale and buys them or reports them.


Did Monte start this?