I saw that article on NHRA website the other day and agreed that Bob had a career year this season. Last year I knew was a scratch because the whole deal started Day One at Pomona with no pre-season testing so the team had no numbers or setups to work with. I talked for a moment with Jim Dupuy in the pits at Atlanta last year and he said that for the most part they were testing in a live racing scenario but they were starting to get a handle on a setup. At the time they were pretty consistent in the 4.60's range but to go rounds you gotta be in the 4.50's. About mid to late year (I can't remember the exact time) the data started telling them they needed more air so they raised the bugcatcher another 1 1/2 inches and the car picked up that 10th to where this year the car ran those 4.50's and it showed with Bob making 4 finals so far and he made the Countdown. The nature of the Countdown unlike NASCAR IMO makes the top teams come off the trailer with the goal of winning the race itself whereas in NASCAR you don't have to win but finish good.

This year was a good year for the team and they got lots of good data and Jim has good notes for a solid tune up week after week. If they don't notch that first win this year, I do believe they will do so next year.

On a different note, I read where Force will send all 4 cars to Vegas but he may only run Hight's car at the event. Seems some data came back that called into question the heat treating process of the chromemoly relating to John, Ashley and even Eric's chassis. Turn's out those 3 cars were built by Murf McKinney and Robert's is an old John Force chassis built by Steve Plueger that was brought out of mothballs at the beginning of the year and updated for racing. John used Steve for years and for whatever reason went over to Murf and Murf builds great chassis'. Whatever this problem is, they have now seen data that suggests a linking to the chassis failure of Eric's car and the are not taking any risks. Phil Burkart is in Vegas to drive John's car but John may not put those cars on the track. John is dead serious about the issue of safety as the data also shows that had the changes from Eric's car not been on John's, John would now be with Eric.

John Force Racing is very close to begin testing of a Ford hemispherical Fuel engine that they hope to put into the racing format and they will at some point also build their cars (chassis, body, etc) in house. I know Jack Rousch did build the cabonfiber bodys for Force but not sure about now. As for the engine, it will be interesting as so far only Brad Anderson and Alan Johnson have independent NHRA authorization to build engines based on the TFX design as they both are we known as building the best heads of anyone. I can only imagine the "Car Make" wars between the Ford and Mopar diehards if Force intros a "Ford Hemi" into the mix. Haven't seen this kind of action since Greer, Black and Prudhomme ran the Ford SOHC motor back in the 60's.

And Jungle Pam too!

wkmac said:
Haven't seen this kind of action since Greer, Black and Prudhomme ran the Ford SOHC motor back in the 60's.

I believe the GBP ran a hemi. I`ll have to check my pics. Great car either way.

Edit: Did some digging the car ran a 392 Chrysler hemi. I think connie Kalitta was the Ford guy at the time. Is this car pure sex or what? 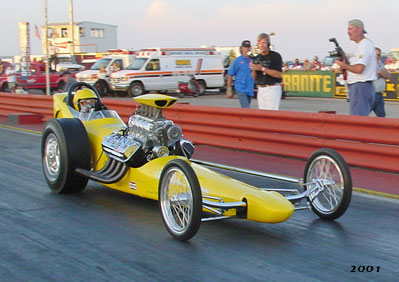 And Jungle Pam too! 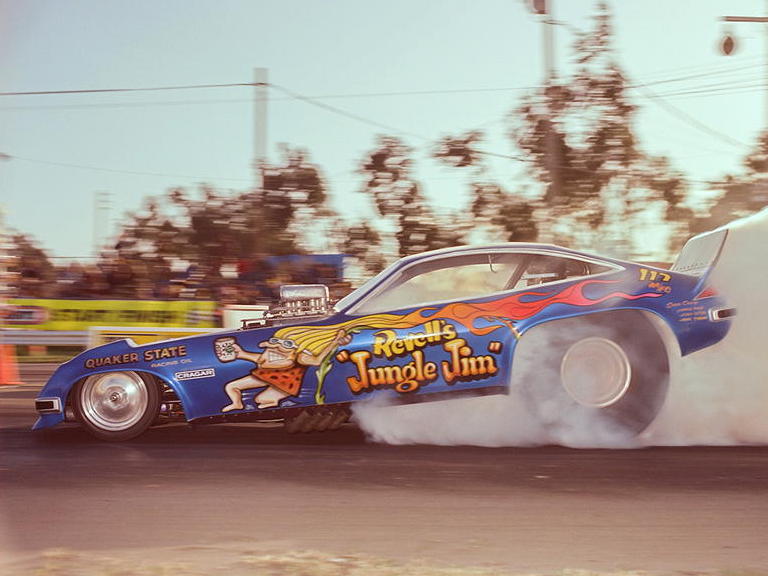 Partly my bad. Prudhomme ran the motor when he drove for Lou Baney and the car was wrenched by legendary Ed Pink. How many guys in racing can claim they've had the 2 legendary engine builders in Keith Black and Ed Pink as crew chiefs? WHOA!

If memory serves me on this, don't hold me to it but if you want some history factoids to search the net for, Snake drove from 62' to 64' on his own nickle and maybe during that period drove for Lou in the latter part. In 65' he drove for Roland Leong and it was 66' that was the infamous GBP car. In 67' Snake was back with Lou and Ed with a Cammer mount. I think if memory serves me that's a rough timeline and yes the GBP car was a hemi. You are correct.

As for other cammer drivers, Bounty Hunter was a Cammer car from 66' to 70' I think (I know Connie drove a Cammer but the exact years are foggy)and Ford also backed drivers Tom Hoover and the late legendary driver/engineer innovator Pete Robinson. From reading about his era a long time ago (before the internet when you had great magazines like Super Stock and Drag Illustrated) the demise of the Cammer in fuel racing was the 10 ft. long timing chain when it came to servicing the motor between rounds. They didn't tear them apart after every round like they do today but when they did, timing it all back in could be a chore, especially in the heat of a thrash.

The legendary hemi has been the engine of choice for decades and it's deserved that status but it would be interesting to see another option hit the scene just for the sake of variety. Also the challenge could lead to advancements that not only affect track performance but further combustion efficencies that give better performance and economy on the street.

And speaking of Bob, he stands 6th after 2 rounds with 2 to go today. In first round on Thursday he ran a 4.54 with a 3 but kicked the tires about 60 foot out on his 2nd pass yesterday. As it stands, he'll face Doug Herbert in Rd #1 but that may all change today. I'm gonna have to tape this race because my daughters perform in a symphony and they have a concert tomorrow night. Hoping Bob can notch his first win and what a great way to setup for next year.

Max Naylor lost his Jagermeister sponsorship so who's up for a Team UPS colors flying in the Pro Stock ranks? I'm for it!

Not sure if you know this or not but the pic of the GBP car you posted was taken at either the Hot Rod Reunion or the March Meet (I think it's Famosa) a couple of years ago after the car was restored. Is that a beautiful mount or what!

Could you imagine being back in the day and actually being at the Smoker's Meet or at legendary tracks like Lion's or even OCIR?

wkmac said:
Max Naylor lost his Jagermeister sponsorship so who's up for a Team UPS colors flying in the Pro Stock ranks? I'm for it!
Click to expand...

I read that last night. Would be kind of ironic for Max to be back on the UPS payroll.

Mark me as a YES vote!

Hey, speaking of Ford and Fuel motors, John Force Racing and FoMoCo intro'd the new Ford Boss Nitro 500 at the SEMA show this past week. The Fuel engine was built by John Force Racing with Gidding&Lewis/Fadal with engineering support obviously from Ford. Of what I've read it's based on the 429 Boss cylinder head configuration and will be exclusive to the FC's of JFR for the near term. I'd guess once all feel comfortable with the engine in NHRA trim and have the data that the engine will expand to more teams but Id venture to say that's a few years off.

JFR with a new engine design/concept and IMO in a year or 2 will design and debut a new FC chassis design that will change the sport.

Thanks for the link to the JFR motor. I`d hate to be a bird or a small plane and get too close to that injector hat. And don`t my future wife look good standing next to it.

The GBP car has to be my all time favorite car,it`s looks and performance were second to none.

cachsux said:
The GBP car has to be my all time favorite car,it`s looks and performance were second to none.
Click to expand...


No argument it was a great car but for me there were several versions of the Swamp Rat that I thought were just stellar, groundbreaking cars. Of those, the 2 most worthy are Swamp Rat 14 which was the first successful rear engine car and Swamp Rat 30 wihich was the first successful streamliner. It's a sad irony that about a month ago Connie Swingle who built a number of chassis for Don passed away. Connie built the chassis for Swamp Rat 14 per Don's design and early testing proved a nightmare with serious steering problems at speed. After several high speed ventures off the track and luckily into the grass at a local Florida dragstrip during testing, it was Connie's suggestion they change the steering box to a slower gear and the car worked. Needless to say Big headed west with SwampRat 14 and within a year almost all Top Fuelers had changed to a rear engine car.

Swamp Rat 30 was the car that Big brought out in the mids 80's at a time when interest in Top Fuel was waning so much that NHRA and IHRA were discussing the potential of eliminating the class entirely. Big came back with the SuperShops Streamliner and reignited the class that moved it forward to what we have today. SwampRat 34 made history when it was inducted into the Smithsonian Museum in Washington DC.

Not taking anything away from anyone else but when NHRA and the sport had to decide on it's greatest drag racer of all time, it was Big Daddy going away.

B
Driving school for seasonal temp?
2