I just had an idea I thought I would float by you concerning the "Current Event" forum. This may not be possible but could you formulate the programming that if you start a thread only in the "current events" forum that you only have that one intial post to say what you want when you start the thread and then you are no longer allowed to post under you user ID? Everyone else can respond as much as they want but you, the originator, are forever prohibited. In other words, taking this thread for example, I could say what I wanted in this post for this thread but that's it. No matter what I couldn't post again. Also, in case we have someone logging off and coming back as unregistered, also cross check and kickout based on IP address. I think that would make things fun and interesting to watch at the same time. Just thought I'd share with you my playful little idea.

Do you ever feel like this thing's a big headache and we're all nothing but a bunch of Ewave's? Ironically, there's probably some truth to that but I said it in the hopes of giving you a chuckle at us remembering back to bygone days in the late 90's. Lot of good folks I miss from MF and think of often especially when I see a huge "Bus" rolling down the highway. Best wishes this holiday season to you and your family. God Bless!

Mac, sounds good, but that too has problems. That would mean if I posted a thread, and say you had a question you wanted me to further explain, I would have to start a new thread to explain the context of the former thread.

I figure allow those that want to talk to themselves, and hold a one sided conversation, to do so. Eventutually, they will give it up and pack it in.

At least the way it's presently set up, the remarks are confined and we can ignore that particular category if we so choose.

Oh I know it has problems but I wonder if it might cut down on the number of threads started in the first place? Hard to say but was thought provoking.

Hey check this out! It's a scream plus I like the music.

That was cool, wasn't it.

It was actually last year's display.

He's doing it again this year.

It's my understanding the film/video crews are capturing it currently for a variety of television programs.

It is the work of Carson Williams of Mason, Ohio, who used 88 Light-O-Rama channels to control
his 16,000 Christmas lights. Apparently he spent somewhere between $2,500 and $5,000 on the hardware and a lot of man-hours programming the choreography. The whole display only requires a 40 amp 120 volt service to run.

Many expressed the thought that the neighbors must just love having this song played over and over again.

The music is broadcast on a vacant FM frequency which people driving by can tune in on their car stereo to listen to. It is NOT blasting the neighborhood with a set of humorous speakers driven by Fender amps like you'd encounter at a live concert.

Also the Trans-Siberian Orchestra saw this display and gave him free tickets with backstage passes and everything to the next year's concert tour. It probably did result in the sale of a lot more CDs to folks who otherwise would have never heard of the band.

that was truly magnificent...too bad he had to shut it down...
Cheryl I was looking around in the brown cafe and I found a link in people to a place that sells stun guns tasers pepper spray and mace among other things.Now were a tad leary on the right to bear arms thing up here and I wondered if you were aware that this link existed.

I've also noticed since late last week this "current events" forum within the Brown Cafe Discussion world has about dried up. Interesting in a variety of ways.

Parting thought of some interest maybe?

"When all are percieved as one with the Mother Church or the small minority just stand in silence lending to the perception then the majority are happy, remain at peace and all is quiet!"

In the history of man during these most quiet moments is when the worst of man does it's most evil. The greatest proof of freedom and liberty is when the single opposite point of view is allowed to be heard and freely expressed as well as the lone voice who respects the voice of the many!
JMO.

Have a nice week to all!
W

Gee think it might have something to do with someone who used to stir up the pot leaving?


double_standard said:
Cheryl I was looking around in the brown cafe and I found a link in people to a place that sells stun guns tasers pepper spray and mace among other things.Now were a tad leary on the right to bear arms thing up here and I wondered if you were aware that this link existed.
Click to expand...

I had forgotten about that link. It was added quite a while ago at a time when there had been a thread about getting pepper spray for aggressive dogs. The link has now been removed since it really wasn't related to UPS in any way.
Last edited: Jan 6, 2013
P

wkmac said:
Oh I know it has problems but I wonder if it might cut down on the number of threads started in the first place? Hard to say but was thought provoking.
Click to expand...

In other words, there oughtta be a law against what you do. 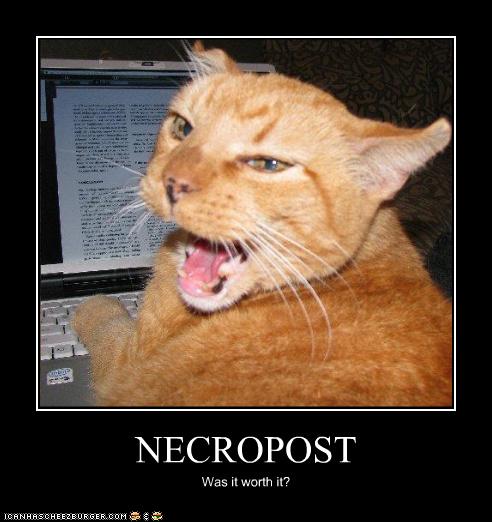 Necroposting and a cat picture. If you had only used a anti-American Canadian quote you'd have had the trifecta.

Hey, just be lucky you get to post in a thread. When I post it takes a day and a half to hit the thread (if at all). Its a joke, but hey the truth hurts some Mods.
P

I was just going to post you. Where ooh where could necropostophiliac be..lol

Cheryl and Tony are together again
5 6 7

Yesterday at 2:51 AM
BlackFriday