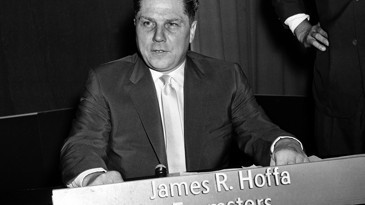 always thought he was in the end zone at the Meadowlands

Brother Moscato’s Dump” was also known as the PJP Landfill: “P” for Phillip “Brother” Moscato; “J” for local political figure John Hanley; and “P” for Paul Cappola, Frank Cappola’s father. Moscato, according to federal and state law-enforcement officials, was a reputed soldier in the Vito Genovese crime family. He worked under Anthony Provenzano of New Jersey, one of two mobsters Hoffa’s expected to meet on the day he disappeared. Moscato died in 2014.

The late Paul Cappola was a respected businessman who owned a waste-management company in Jersey City and was Moscato’s partner at the PJP Landfill. Cappola was certainly connected to the underworld but, unlike Brother Moscato, was not a “made” member of the Mafia. Still, like Moscato, he was obedient to the powers that controlled the waste-management industry in New Jersey and New York during the 1970s.

Frank, who was seventeen and working part-time at the dump when Hoffa disappeared during the summer of 1975, stated in his affidavit: “While I was talking to my dad, a black limousine drove onto our lot in the mud. My dad said to Mr. Moscato, something like, ‘They’re here.