Been meaning to thank you for posting this video piece on Net Neutrality. The interent is very important to the spreading of ideas and thoughts among people and it allows us to share ourselves with others and visa versa. Glad to see folks speaking out on this issue.
S

As a techno-geezer*, I already miss the useful non-commercial information that was available in the past. It is still out there, but it can be hard to find.

I am not against commercial use of the internet - it sure is better than ordering some company's printed catalog, waiting for it, mailing an order with paper-based payment and waiting. However, it has become difficult to find information that is NOT commercial in content. (Except someone ranting to the camera on their PC. That is way too easy to find, and I do not care to hear what color someone's roommate dyed their cat.)

A lot of businesses have reaped the benefits of this infrastructure that our government created, and it has lots of benefits for individuals. So, do we let some businesses effectively take this from us and profit from the communication system that was researched, developed and built on our tax dollars? I hope not.

* I almost forgot: We had to type uphill in the snow. In the 70's, we would type on machines that punched holes in yellow paper tape that could then be uploaded to a distant computer. Downloading a program would also produce yellow punched tape. This produced vast quantities of confetti, which we called "snow". Today, it would be called "yellow chad", which is not as funny.

You tell that to these kids nowadays, they don't believe you.
R

Republicans are not happy about the administration's plan to rewrite net-neutrality rules aimed at ensuring free and equal access to the Internet and will introduce a bill soon to block the effort.


The Federal Communications Commission announced Wednesday that it plans to reinstate rules that would restrict Internet providers from blocking websites or charging sites like Netflix an extra fee for faster service. The announcement comes one month after a federal court struck down the commission's net-neutrality rules but upheld its authority to regulate the Internet.


Top Republicans called the FCC's efforts to revive net-neutrality rules "a solution in search of a problem," and plan to fight any new rules. Rep. Marsha Blackburn of Tennessee will introduce legislation in the coming weeks to block what she calls the "socialistic" proposal. 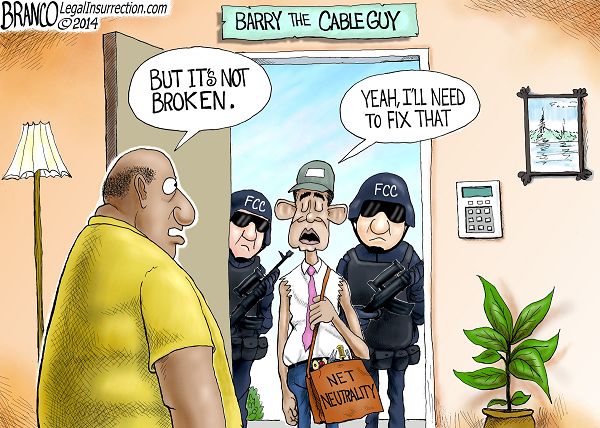 Someone has no idea what net neutrality is

sportello said:
Someone has no idea what net neutrality is
Click to expand...

'Cause no one on here can read and understand the previous 7 or 8 posts......only you with your powerful brain and belittling attitude to all who don't equal your intelligence.
You're special.

sportello said:
Someone has no idea what net neutrality is
Click to expand...

'Cause no one on here can read and understand the previous 7 or 8 posts......only you with your powerful brain and belittling attitude to all who don't equal your intelligence.
You're special.
Click to expand...

'Cause no one on here can read and understand the previous 7 or 8 posts......only you with your powerful brain and belittling attitude to all who don't equal your intelligence.
You're special.
Click to expand...

"...Net neutrality (also network neutrality or Internet neutrality) is the principle that Internet service providers and governments should treat all data on the Internet equally, not discriminating or charging differentially by user, content, site, platform, application, type of attached equipment, or mode of communication. The term was coined by Columbia University media law professor Tim Wu in 2003 as an extension of the longstanding concept of a common carrier..." LINK

What Comcast and other cable companies want to do is implement some sort of 'tiered' system whereby websites that pay them more or whom they are aligned with will have faster speeds coming into your house. This is problematic for a bunch of different reasons that other people are probably better at describing than I am.

A good analogy that I heard is the comparison between internet service providers and electric companies.

I pay my electric company for electricity, but they don't get to decide what I do with that electricity. They charge me a rate, I use the electricity as I choose, end of story.

If Comcast gets their way and is able to change the speeds or download rates of certain websites over others, that would be like my electric company telling me that since I use a Kenmore washer, they're going to slow my washer down a bit, but if I bought a Maytag washer, it would run just fine, unless I wanted to pay them a bit more, and then my Kenmore would also run fine, etc. etc. That's insane.

In this case, I think Obama is correct. Letting the big players decide who gets into the internet game is anti-free market and would add a chilling effect to innovation.

Obama wants the FCC to reclassify broadband service so it won't be subject to the whims of the largest players in the industry. In this instance, I think he's correct.

When Ted Cruz says this is just like Obamacare, that's not even apples and oranges, that's apples and spaceships.

Thanks for the explanation though.
Last edited: Nov 19, 2014

Obama uses the term net neutrality but his definition includes increased government regulations and red tape with increased cost to all consumers for the same level of service. A far cry from a truly open internet.

olngray, Are you opposed to net neutrality? If so, can you explain why?

Are you asking him to think for himself rather than copy and paste the thoughts of others?

Explain what you consider net neutrality. The kind Obama is pushing is far from neutral and just increases costs to consumers.

UpstateNYUPSer said:
Are you asking him to think for himself rather than copy and paste the thoughts of others?
Click to expand...

If you had clicked on the link he quoted you would have seen the first paragraph was my own words and the second paragraph was a copy and paste with a link to support my position.

This issue really boils down to one big problem, and that is lack of competition in the world ISPs or internet service providers. I recall back in the 90s when mostly everyone I knew used a dial up modem to connect to the internet, and sure the speeds were slow, but the choices in providers were many. I can recall many different ISPs that were available to my parents back in the day, and even knew a few people who started their own ISP. It just took a little bit of money, some subscribers, and bam you were an ISP. Then came along cable internet. Now don't get me wrong, I love my cable internet connection when compared to my old dialup connections of old, but I do understand the problem where you have maybe one or two(if you are lucky) providers of this now standard internet connection. With a large percentage of American households hooked up to a small handful of providers they do have the potential to get overly controlling and try to become internet traffic controllers instead of just internet service providers. This is a problem, but I can also see a problem with the government stepping in and starting to tell these companies how they are to use their own networks. I would support changing the regulations to allow more competition rather than telling companies how to they can control the internet. Don't forget that starting down this dangerous path of government intervention means putting the most open and free market in the history of mankind, not just of goods and services, but of ideas to politically charged regulators if you will. Do we want the same FCC that regulates content in TV to begin to do the same on the internet? Government regulations don't end with just a few simple rules, they grow and multiply to the point that they are a confusing mess of rules that nobody really understands. I personally understand why people think there is a need for net neutrality, but honestly I think that will be the start of much bigger problems down the road. As time progresses and internet technologies evolve I believe this lock the cable and phone companies have on broadband internet connections will wane as more wireless technologies come into play. SpaceX is developing an alternative source of internet connections through a network of small, cheap satellites(http://www.geek.com/science/spacex-...ellites-for-low-cost-internet-access-1609128/), and google is getting into the broadband network with its slow growing list of cities to get its google fiber network(https://fiber.google.com/about2/). I know the easiest answer is to ask our government to step in, but think about the future consequences of doing so before embracing what seems so innocent today.

oldngray said:
If you had clicked on the link he quoted you would have seen the first paragraph was my own words and the second paragraph was a copy and paste with a link to support my position.
Click to expand...

I'm not a mind reader, differentiate your thoughts from your copy and paste. Italics work well.

If you were to read your own link you would have grasped this:

UPS Maximizing Its Potential In Shortages Of 'Everything'