I will be posting here about georgey boy's life and what he did to the world.
R


I’d rather be a forgotten critic than an accomplished, remembered mass murderer


Mike Cernovich
Verified account @Cernovich
You might not have liked or agreed with him, but George H.W. Bush lived an exceptional life of accomplishment. His critics will be forgotten, he won’t be.
Show this thread
36 replies 172 retweets 768 likes
R

For Balance sake I remind all that he payed the ground work for Trumps racism by pushing Willie Horton campaign strategy.

It figures that the woman who annihilated Libya and brought slave-selling jihadists to power thinks the guy who bombed Iraq with depleted uranium is a “class act”.


Hillary ClintonVerified account @HillaryClinton
George H.W. Bush was a beloved father & grandfather, a war hero, a public servant, & a class act. In my experiences w/ him, I always valued his desire to listen, look at evidence & ask for ideas, even from people w/ different beliefs. My heart goes out to the entire Bush family.
63 replies 889 retweets 1,965 likes
R

whats with all the censorship?

i thought america was land of the free. seems like its land of "not mature enough to deal with hard truths"
R

from the intercept article quoted above:

the good:
"It is true that the former president refused to vote for Trump in 2016, calling him a “blowhard,” and that he eschewed the white nationalist, “alt-right,” conspiratorial politics that has come to define the modern Republican Party. He helped end the Cold War without, as Obama said, “firing a shot.”"

“When a political leader dies, it is irresponsible in the extreme to demand that only praise be permitted but not criticisms,” as my colleague Glenn Greenwald has argued, because it leads to “false history and a propagandistic whitewashing of bad acts.”

..."“You and George Bush will wear that to your grave,” (ROGER) Stone complained to Atwater. “It’s a racist ad. … You’re going to regret it.”

..."He made a dishonest case for war. Thirteen years before George W. Bush lied about weapons of mass destruction to justify his invasion and occupation of Iraq, his father made his own set of false claims to justify the aerial bombardment of that same country."
R


"I will never apologize for the United States — I don't care what the facts are... I'm not an apologize-for-America kind of guy."

44 oversaw the destruction of Libya, Syria and Yemen.

41 and 43 invaded Iraq on lies, killing and displacing millions, and turning the country into a graveyard infested with depleted uranium.

A club of war criminals is more like it. 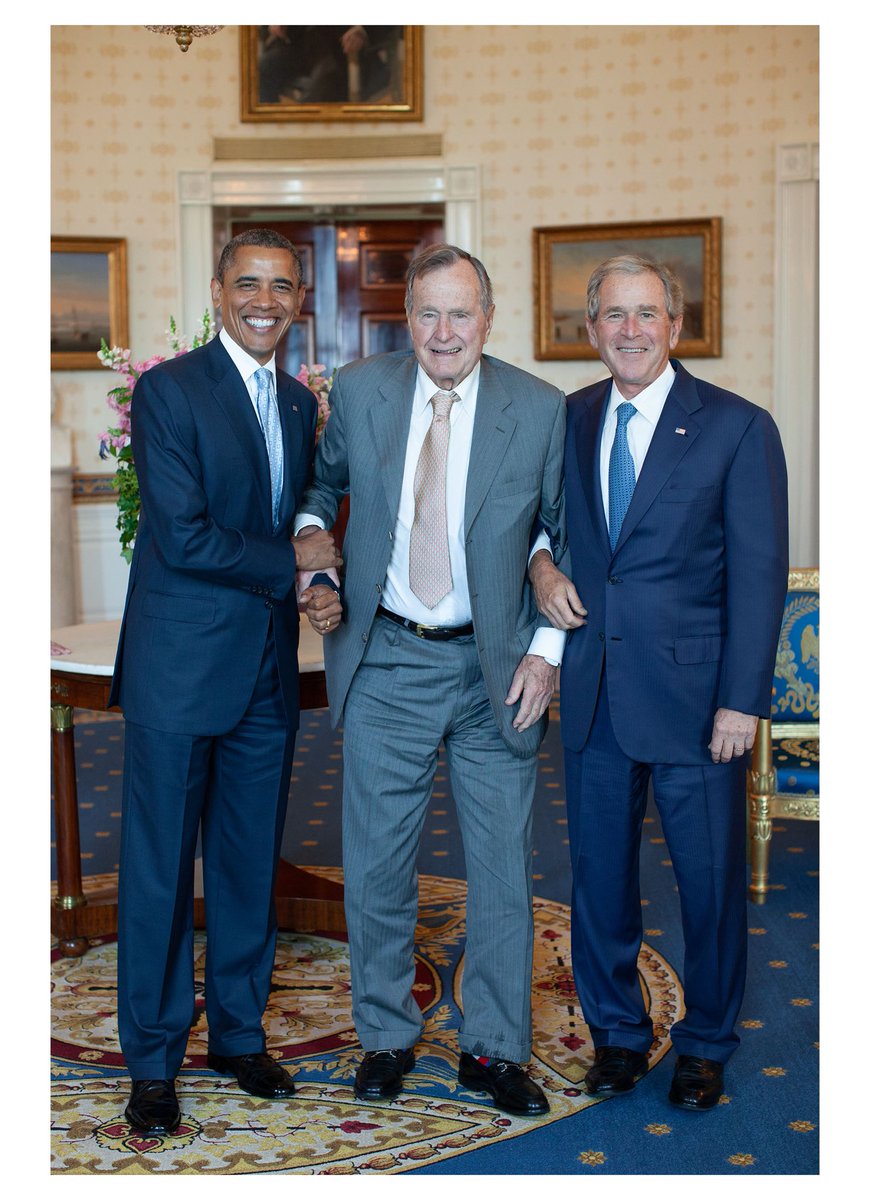 rickyb said:
sounds like alot of BC members LOL


"I will never apologize for the United States — I don't care what the facts are... I'm not an apologize-for-America kind of guy."

I would take a president with this attitude any day over one who goes around the world bowing to other leaders and apologizing for America.
R

Operational needs said:
I would take a president with this attitude any day over one who goes around the world bowing to other leaders and apologizing for America.
Click to expand...

when you do something wrong, you should apologize
R


The U.S. is an extreme right-wing nation and it didn't get there beginning in Jan of 2017. The revisionist praise of George H. Bush is just the latest evidence of that fact.

rickyb said:
when you do something wrong, you should apologize
Click to expand...

A leader needs to look strong to the world.
R

Operational needs said:
A leader needs to look strong to the world.
Click to expand...

real leaders apologize when they are wrong. thats what happens when youre honest.

guys like bush are no leaders; they are just leading us off a cliff

Operational needs said:
A leader needs to look strong to the world.
Click to expand...

....or obese senile and racist?

A
How do I get in contact with HR or payroll about my W-2?